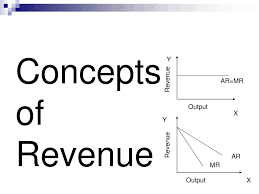 In this post, you will study Theory of Revenue. Understand the topic and make notes properly.

Revenue is the amount that a firm receives from the sale of the output.

ACCORDING TO PROF. DOOLEY

“The Revenue of a firm is its sales receipts or income.”

There are three concepts of revenue which are as follows:

TR is the amount of money that a firm receives for the offer of goods and services in the market. A firm’s total revenue can be calculated as the quantity of goods sold multiplied by the price. The TR includes the product of the quantity sold and the price.

P – Price per unit of output

ACCORDING TO CLOWER AND DUE

Total revenue may be defined as the “product of planned sales (output) and expected selling price.”

ACCORDING TO STONIER AND HAGUE

“Total revenue at any output is equal to price per unit multiplied by quantity sold.”

“Total revenue is the sum of all sales, receipts or income of a firm.”

AR is used as price in a perfectly competitive market. This can be found by the ratio of the firm’s total revenue and the number of goods sold.

ACCORDING TO STONIER AND HAGUE

“The average revenue curve shows that the price of the firm’s product is the same at each level of output.”

ACCORDING TO MC DONNELL

“Average revenue is the per unit revenue received from the sale of one unit of a commodity.”

It is calculated as:

“Marginal revenue is the change in total revenue which results from the sale of one more or one less unit of output.”

“The marginal revenue is the change in total revenue resulting from selling an additional unit of the commodity.”

RELATIONSHIP BETWEEN TR, AR AND MR

The relationship between TR, AR and MR can be well explained with the help of table:

Then, there comes a point where the TR becomes maximum and constant i.e. 30. At this point the AR is still falling but MR becomes Zero.

After that, the TR starts diminishing and then MR becomes negative and AR keeps on falling.

The relationship can also be shown with the help of diagram:

The relationship among TR, AR and MR can be summarized as follows:

(i)TR increases at a diminishing rate with increase in the units of output, since more units of the commodity can only be sold at a lower price, such that MR is positive and is downward sloping.

(ii) At the point when TR is maximum MR happens to equal to zero.

(iii) MR becomes negative, when TR decreases with increase in the units of output.

(iv) MR falls with the fall in AR, but, the rate of decrease in MR is much higher than that in AR.

(v) MR may be positive, negative or zero, but AR is always positive (since negative price is illogical)

A Perfect Competition market is that type of market in which the number of buyers and sellers is very large, all are engaged in buying and selling a homogeneous product without any artificial restrictions and possessing perfect knowledge of the market at a time.

Thus, in perfect competition an individual firm is price taker, because the price is determined by the collective forces of market demand and supply which are not influenced by the individual. When price is the same for all units of a commodity, naturally AR (Price) will be equal to MR i.e., AR = MR.

The schedule is shown in the table below:

In table it is found that as output increases, AR remains the same i.e. Rs. 5. TR increases but at a constant rate. MR is also constant i.e. Rs. 5 and is equal to AR.

This can also be shown with the help of diagram:

In above figure, on the X-axis, quantity is taken whereas on Y-axis, there is revenue. At price OP, the seller can sell any amount of the commodity. In this case the AR curve is the horizontal line. The MR curve coincides with the AR.

It is because additional units are sold at the same price as before. In that case AR = MR. A noteworthy point is that OP price is determined by demand and supply of industry.

Monopoly refers to a market situation in which there is only one seller of a commodity.

There are no close substitutes for the commodity it produces and there are barriers to entry. The single producer may be in the form of individual owner or a single partnership or a joint stock company. In other words, under monopoly there is no difference between firm and industry.

Monopoly is opposite to perfect competition. Under monopoly both AR and MR curves slope downward. It indicates that to sell more units of a commodity, the monopolist will have to lower the price. This can be shown with the help of following table and diagram:

In case of pure monopoly, AR and MR curves slope downward steeply. In this situation, a producer is so powerful that by selling his output at different prices, he can make the consumer spend his income on the concerned commodity. It implies that TR of the monopolist will remain same whatever may be the price. Area below each point of AR curve and MR curve will be equal to each other. The curves are less than perfectly elastic.

Monopolistic competition is a market form where there are large number of buyers and sellers selling the heterogeneous i.e. wide variety of products and incurring huge selling costs.

The revenue curves under the monopolistic competition are more than perfectly elastic.

This can be explained with the help of following table and diagram:

In monopolistic competition, there exists the free price policy of a commodity of a firm which means the price of the commodity remains under the control of the firm. So to increase the sale of units, price has to be reduced. Because of more price elasticity of demand, AR and MR slope downward from left to right but both are with less sharpness of slope and AR and MR are nearer to each other.

RELATIONSHIP BETWEEN AR, MR AND ELASTICITY OF DEMAND

The formula for the calculation is:

This can be well explained with the help of following diagram:

In this diagram, revenue has been shown on OY-axis while quantity of goods on OX-axis. AB is the average revenue or demand curve and AN is the marginal revenue curve. At point P on demand curve, elasticity of demand is calculated with the formula,

It can be seen in the figure that AEP and PMB are similar, thus ratio of their sides is also equal.

And; ∆AET and ∆PTL are congruent triangles, therefore PL=AE. Putting PL in place of AE in the above equation, we shall get