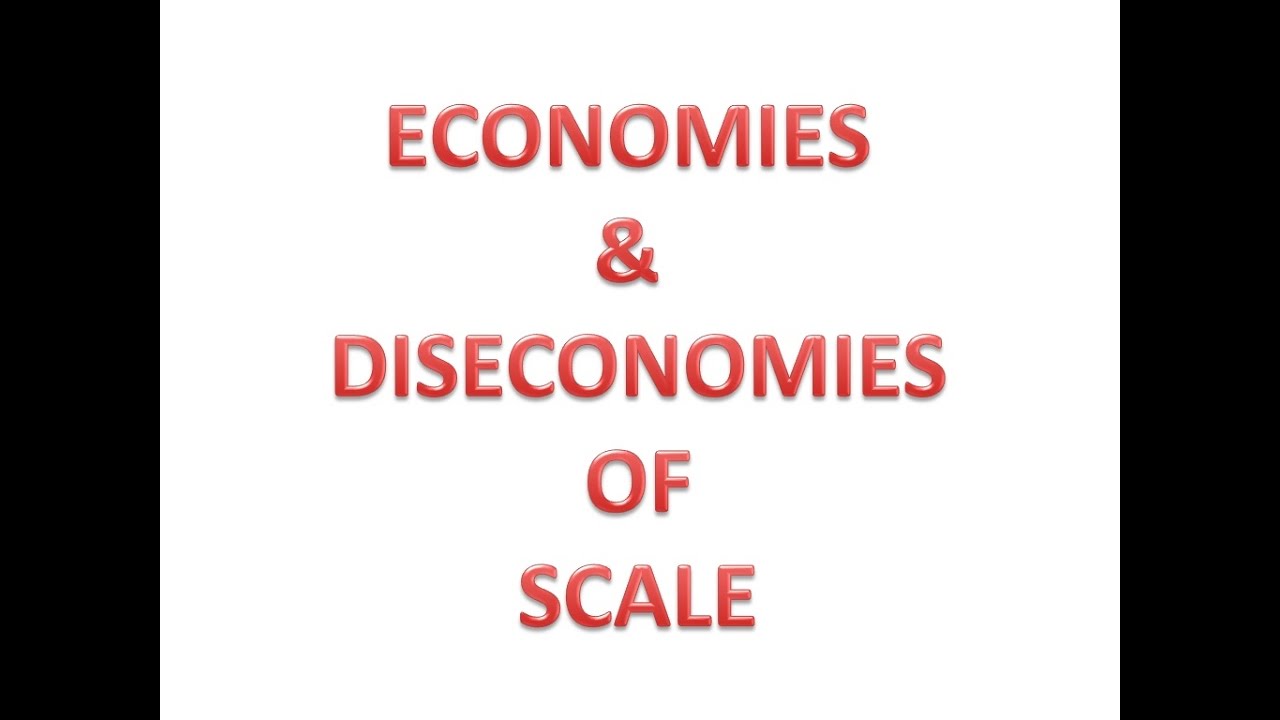 ECONOMIES AND DISECONOMIES OF SCALE

Economies and Diseconomies of scale arises due to law of returns to scale.

Economies of scale are defined as the cost advantages that an organization can achieve by expanding its production in the long run.

In other words, these are the advantages of large scale production of the organization. The cost advantages are achieved in the form of lower average costs per unit.

TYPES OF ECONOMIES OF SCALE

The Economies of scale are of two types:

Internal economies of production arise when the benefits or advantages of a firm’s expansion are enjoyed by the firm itself.

Thus, internal economies accrue only to the individual firm by its own organizational ability and effort. These internal advantages reaped by a firm enable it to lower its average cost of production as its scale of production increases. These are called internal because the scale economies are within the control of the firm.

Internal economies result from various factors. These are:

(1) Increased Specialization: One of the most important sources of internal economies is technology. Large firms can use specialized and highly efficient machinery (often called ‘dedicated machinery’) along with specialized labour. If the production process is split into a number of various stages, machines can be designed specially for each stage.

(2) Factor Indivisibility: Factor indivisibility is another source of technological economies enjoyed internally by a firm. Some factors are indivisible or lumpy in character. These cannot be installed in fraction or in smaller units. Steel production requires installation of blast furnace having high fixed costs.

If large scale operations are to be made in a steel factory it should employ indivisible items. It will be grossly inefficient if small quantities of steel are produced with this blast furnace. Obviously, a large firm will then be able to achieve lower costs.

(3) Economies of Increased Dimensions: Doubling the length, breadth, and the height of a cube, the surface area increases four times and the volume increases eight times of the original. This simple mathematical principle is suggestive of economies of increased dimensions.

Large firms often reap economies of increased dimensions than small firms. This results in lower costs. If the dimension of a container increases, the cubic capacity increases more than proportionately. If the diameter of a water-pipe is increased then the discharge of water will be larger than its diameter.

A double- Decker bus carries more passengers than a single-decker bus, yet no extra cost for running the bus is required. Again, when a firm doubles its sales, it is not at all needed to double its inventory expenditures. This is called economies of increased dimensions.

(4) Principle of Multiples: Usually, the production process of a large firm involves the use of different types of machinery having different capacities. Some of them can produce small quantities while some others large quantities of output, thus, achieving a high utilization rate.

In other words, efficient as well as optimum utilization of machines is possible since large firms can afford to make use of multiple machines. Further, production may be multistage. For example, car component suppliers remain closely linked to car manufactures. Once these are conducted on a large scale, it becomes cost-effective.

(5) Use of By-Products: A large firm can utilize its by-product or save the waste materials. A big factory like that of Tata’s can use its smoke emanating from its factory site to produce articles like tar, naptha, etc. A small firm is always at a disadvantageous position. A large sugar factory can produce alcohol as a by-product.

(6) Research and Development: It is only the large firms that can conduct its own research and development (R & D) programme so that newer and improved techniques of production are developed.

A large firm can reap substantial economies in the purchase and sale of goods and raw materials. As large firms purchase raw materials in bulk quantities, they can obtain the same at a wholesale cheaper price or at favourable discounts.

As far as sale or distribution of a product of a large firm is concerned, it appoints expert or specialist sellers as well as expensive but more cost- effective advertising. Advertisements attract more customers and, hence, lead to increased volume of sales. Further, packaging costs can also be spread over bulk sales.

A large firm can secure business finance easier as it has huge assets or collateral security. Because of its reputation, the shares of large firms are sold easily. Again, investors enjoy greater confidence in buying shares, debentures and other securities of a large firm. Further, large firms obtain loans from banks and other agencies at favourable rates because of their long-standing reputation and influence.

It is the size of large firms that enable them to use more advanced and specialized management techniques. Different departments may enjoy specialist management personnel. Managerial economies can now be secured by the delegation of functions to each specialist.

A business always involves uncertainty and, hence, risk. Through diversification of output, markets, and sources of supply, a large firm can withstand any adverse conditions emanating from a particular product or market. In other words, a large firm can spread its risks and the loss in one market consequent upon a decline in demand may be offset by the gain in another market.

Thus the large firms are less vulnerable to risks involved in business. A small firm is exposed to large risks since it cannot distribute risks among different products or markets because of the absence of diversification.

External economies arise when an increase in a firm’s expansion produces favourable effects on other firms. In other words, benefits of increased production spread on other firms in the industry or in the region.

External economies can also be grouped into three:

(I) ECONOMIES OF CONCENTRATION

It may happen that a particular area(s) often specialize in the production of particular products due to the availability of various inputs required for production. If a particular area is endowed with a variety of resources including infrastructure facilities, industries tend to flock in such areas.

In other words, more and more industries get concentrated in these geographical areas leading to a decline in average costs of all firms. It is said that Bangalore is the Silicon Valley of Asia as IT growth in this part of the country is phenomenal.

The computer software firms in Bangalore share external economies for their close proximity to other firms. All firms enjoy the benefits of a pool of highly skilled staff, shared training programmes, better transport links, etc.,

External economies may also be related to a trade association which may provide trade information as well as market trends. It may organize trade fair or various marketing facilities that may not be exploited by a single firm.

All the firms, particularly the bigger ones, in a geographical area may cooperate in the realm of research and development. The R&D wing of a modern large firm provides valuable information relating to a business through its trade and technical journals. Other firms benefit from the dissemination of information for which no direct costs are incurred by these firms. Thus average costs of production tend to decline.

When an industry develops, many specialized firms get established specializing in particular stages of the production process. This is called disintegration which results in increased efficiency.

Economies of scale can never be unlimited. As a result, expansion beyond a certain point will not cause average costs to decline. Instead, it will rise as the firm expands. In other words, when the size of a firm becomes large, possibilities for economies get exhausted and diseconomies set in.

There are four important internal causes of diseconomies of scale:

The size of the firm may hurt itself. Technologically, it is not wise always to use more and more complex machinery which itself is expensive.

We know that division of labour or specialization is limited by the extent of the market. If the market is narrow, continual expansion in size may not be cost-effective. Transport costs may shoot up if raw materials or finished products are required to be transferred in distant markets.

As the size of a firm increases, administrative problems as well as coordinating problems may emerge due to the growth of bureaucracy or a minute division of managerial labour.

In a large-sized firm, managerial functions become increasing­ly difficult to perform effectively since more and more layers of administrators and executives are added with the expansion in size. Here Parkinson’s Second Law comes into effect which states: “Subordinates multiply at a fixed rate, regardless of the amount of work produced.”

These are internal diseconomies of large scale production. Diseconomies of scale may also be external. Because of localization of industries in a locality, there occurs the problem of traffic congestion or pollution. In view of these problems of large scale production, modern governments also support the growth of small firms. The philosophy of ‘small is beautiful’ works