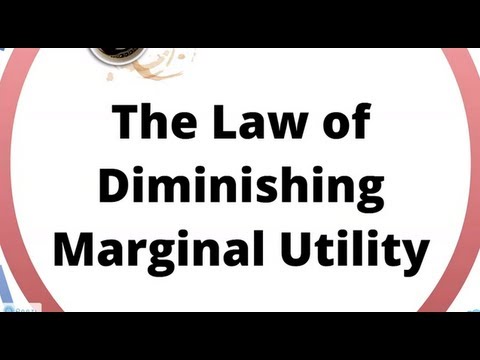 Mr. H. Gossen, a German economist, was first to explain this law in 1854. This is also known as Gossen’s First Law of consumption.

ACCORDING TO ALFRED MARSHALL

“The additional benefit which a person derives from an increase of his stock of a thing diminishes with every increase in the stock that already has”.

ACCORDING TO PAUL A. SAMUELSON,

“As the amount consumed of a good increases, the marginal utility of the good leads to decrease.”

ACCORDING TO PROF. K E BOULDING

ACCORDING TO PROF. THOMAS

“The utility of additional supplies of a commodity diminishes with every increase but at a diminishing rate until eventually, any further increments of the commodity may even have disutility”.

ACCORDING TO PROF. EDWARD NEVIN

“The extra satisfaction derived from the consumption of additional units of any commodity tends to decline as the quantity consumed increases.”

The law of diminishing marginal utility is true under certain assumptions. These assumptions are as under:

(i) Rationality: In the cardinal utility analysis, it is assumed that the consumer is rational. He aims at maximization of utility subject to availability of his income.

(iii) Diminishing marginal utility: Another important assumption of utility analysis is that the utility gained from the successive units of a commodity diminishes in a given time period.

(iv) Utility is additive: In the early versions of the theory of consumer behavior, it was assumed that the utilities of different commodities are independent. The total utility of each commodity is additive.

(vi) Suitable quantity: It is also assumed that the commodity consumed is taken in suitable and reasonable units. If the units are too small, then the marginal utility instead of falling may increase up to a few units.

(viii) No change to fashion: Customs and tastes: If there is a sudden change in fashion or customs or taste of a consumer, it can than make the law inoperative.

EXPLANATION OF THE LAW

The law of diminishing marginal utility can be explained with the help of following table and diagram:

In the diagram, numbers of apples are shown on OX-axis and marginal utility on the OY-axis. MU curve shows the decreasing trend of all the units of apples. The 5th unit of apple gives zero (0) MU while the 6th unit gives negative marginal utility. A is the point of satiety, thereafter consumer should not consume additional unit of apple.

There are three stages of marginal utility as given below:

(i) MU shows a decreasing trend up to 4th unit of apple but it is positive.

(ii) MU is zero from the 5th unit of apple and it is the satiety point. Consumer should not consume after this point.

(iii) MU becomes negative with the consumption of 6th unit of apple.

Human wants are unlimited and the resources are scarce with alternative uses. A particular want can be satisfied on a particular point of time. When a consumer consumes different units of a commodity on continuous basis the additional utility derived by him goes on declining and thereafter he gets zero and even negative utility. When he gets zero utility it means a saturation point has reached and after that point he would like to consume additional unit of that commodity. Hence, the law of diminishing utility will operate.

(iii) No Perfect Substitutes of Goods:

There are substitute goods but they can be substituted to some extent only and there is not perfect substitute of goods. For example, bread and butter are consumed in a ratio and any imbalance in the ratio of the two will give you diminishing marginal utility.

This law is applicable for homogenous unit only, i.e. only if all units of a commodity consumed are similar in length, breadth, shape and size. If there is a change in such factors, the utility obtained from it can be increased. For example: If the 2nd orange is much larger than the 1st one, it will yield more satisfaction than the 1st.

The quantity of the commodity a consumer consumes should be reasonable. If the units of consumption are too small, then every successive unit of consumption may give higher utility to the consumer. For example: If a person is given water by a spoon when he is very thirsty, each additional spoonful will give him more satisfaction.

NOT A SUITABLE TIME PERIOD

There should not be very long gap between the consumption of different units of the commodity. If there is time lag between the consumption of different units, then this law may not hold good. For example: If a man has lunch at 10 a.m. and dinner at 8 p.m. and eats nothing in between, the dinner will possibly yield even more satisfaction than the lunch, i.e. his marginal utility will not diminish.

CHANGE IN TASTE AND FASHION OF THE CONSUMER

The law of diminishing marginal utility will be applicable only if the consumer is not supposed to change taste and fashion of the commodity whatever he/she was using previously.

The law of diminishing marginal utility is applicable for normal person only. Abnormal persons such as drunkards and druggist are not associated with the law.

CHANGE IN INCOME OF THE CONSUMER

The law is not applicable in case of durable goods as well as valuable goods such as buildings, vehicles, gems, gold, etc.

CONSUMPTION OF VERY SMALL UNITS OF THE COMMODITY

The law of diminishing marginal utility does not hold good when the units of consumption of the commodity are very small in size and quantity. For example, if a thirsty person is given water in small drops in place of a glass of water the law does not operate.

The law is not applicable in those cases where people collect rare commodities, monuments, antiques, old coins, documents, stamps, etc. For those things which are collected as a hobby the marginal utility will increase instead of decline in it.

The law does not apply in case of classical music, gazals, poems, etc. The audience will enjoy more by listening such music, gazals and poems and the law will not operate.

The law does not apply to miser men because their aim is to accumulate more and more of wealth or money. The additional units of money collected by them will give more satisfaction.

The law does not apply to alcoholic drinks. A drunkard takes additional pegs of wine and his satisfaction goes on increasing. Hence the marginal utility from additional peg will increase.

INCREASE IN THE NUMBER OF USERS OR CONSUMERS

The law will not apply to those goods and services whose consumers’ or users’ number is increasing. For example, the numbers of telephone connections are increasing day-by-day and the utility is increasing instead of decreasing in practical life.

The law does not apply to personal hobbies. For example, people have hobbies collecting old coins, old photos, old stamps and sea-shells. In such cases additional collection of these things will give them more satisfaction and the law will not operate.

The importance of the law can be classified into two categories as given below:

A. Theoretical Importance of the Law:

The law of diminishing marginal utility has theoretical importance in the study of economic analysis.

Several economic laws have been propounded or are based on this law as given below:

The law of demand is based on the law of diminishing marginal utility. As a consumer consumes additional units of a commodity the marginal utility declines. He can purchase more quantum of that commodity if the price charged is low. Contrary to it, by consuming less units the utility derived by him will be more and he is ready to pay even high price for the units of that commodity.

With the increase in the surplus of a commodity the marginal utility of that commodity will decline. The exchange value of the commodity will also decline. This law is the basis for the theory of pricing of various goods and services in the economy.

B. Practical Importance of the Law:

The law of diminishing marginal utility has practical importance in our life.

Practical importance of the law is discussed as given below:

(i) Basis of Production:

The law is the basis of production and on account of this law a variety of goods and services are produced and consumed in the economy. As the supply of a commodity increases its utility will decline and consequently, it will adversely affect the profit of a producer. In such a situation producer will produce those goods which are demanded more.

As consumer derives zero or negative marginal utility from the goods he will stop the consumption of such goods and divert his attention to consume those goods having more utility. It will encourage producers to produce more because of profitable venture.

The law has practical importance in the field of public finance. Progressive rate of taxation is the basis of modern taxation system which collects more revenue from the rich sections of society as the marginal utility of money for these people is less. Contrary to it, poor people have paucity of money and the marginal utility of money to these people is high and they are not taxed by the government and economic assistance to these persons is given by the government.

The law of diminishing marginal utility also provides the basis for the distribution of wealth in a socialist economy. Wealth is transferred from rich to the poor so the marginal utility of money will increase which is low for rich people.

(iv) Value in Use and Value in Exchange is Explained:

Thus, we can say that the law of diminishing marginal utility is a universal law and it operates not only in consumption goods but the various sectors of the economy are also affected by the law.

Conditions are unrealistic: In the assumptions to this law we have seen the different conditions that are required for this law to hold good. This included the assumptions like uniform nature of units, continuous consumption, and satisfaction of a single want and so on. In practical terms it is not that easy to meet these conditions and hence these could be called as impractical in nature. So this could be said as the limitation to the law of diminishing marginal utility.

Cardinal measurement: Wehave the law with respect to the utility schedule. It simply means that we have stated the law in terms of cardinal measurement of utility. So for this law to hold good it is assumed that utility can be measured in cardinal numbers and these are used to show  how with increase in the intake leads to fall in the marginal utility. Utils are used to show the utility table. We have also seen that utility is subjective in nature as the product may provide different levels of utility to the different users. Hence this assumption of cardinal measurement of quantification of utility may not be that compelling.

Cannot be applied to indivisible goods: This law assumes the divisibility nature of the commodity thereby rendering its inapplicability to products that are indivisible in nature. Think of products like washing machine, four-wheeler, television set and other such products that are not divisible in nature. We cannot simply talk of utility of such goods with increase in stock because these are not brought in successive units thereby making the law inapplicable to such products.

The law of diminishing marginal utility is a very widely studied concept in the world of economics. It helps us understand why a consumer is less and less satisfied with the consumption of every additional unit of a good. The law is based on the ordinal theory of utility and requires certain assumptions to hold true. However, there are exceptions to the law as it might not hold true in some cases.