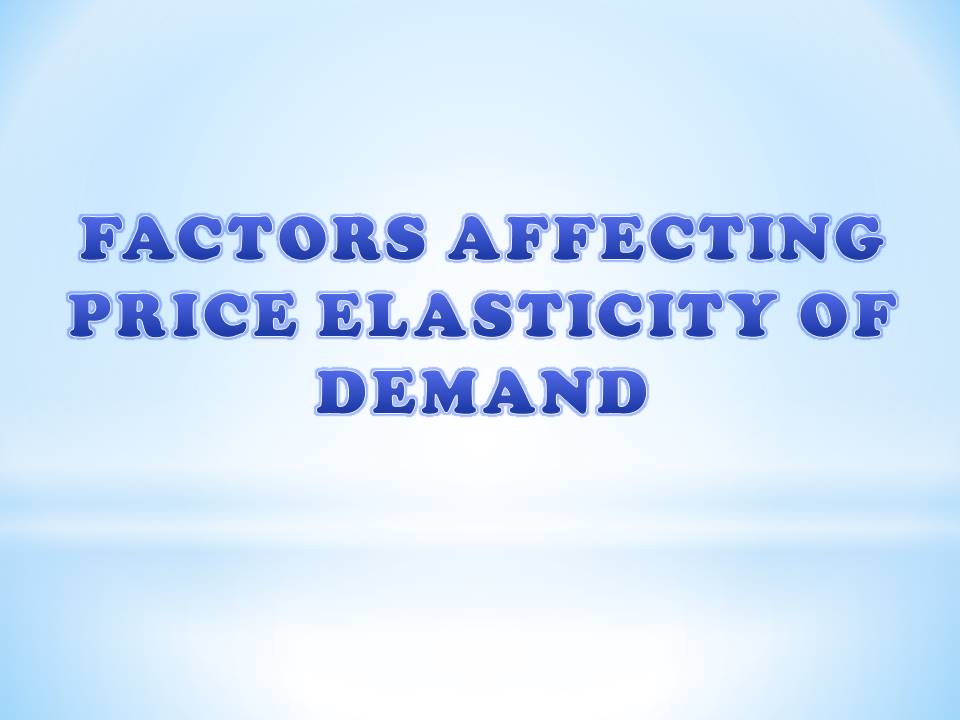 The Factors affecting Price Elasticity of Demand are as follows:

Nature of the commodity is the most important factor that affects the price elasticity of demand. There are three types of commodities: Necessaries, Comforts and luxuries. Necessaries are those goods which are mandatory for survival of human being. Comforts are those which make our life smooth and happy living. Luxuries are the goods considered as status symbol. The price elasticity of demand of these three kinds of goods is:

Substitutes are those which can be used in place of one another. Example: Tea and Coffee, Pepsi and Coke etc. The price elasticity in case of availability of substitutes is:

There are some commodities which can be used alternatively or these commodities have multiple uses like milk, coal etc. The demand for these goods rises as the price falls and vice versa. The price elasticity of demand in this case is as follows:

In Economics, the time is divided into two horizons: Short Period and Long Period. The elasticity of demand is also get affected by the duration of time.

POSTPONEMENT OF USE OF COMMODITY

Commodities which have become habits of consumer have inelastic demand because demand does not get affected by change in price.

There are some commodities which are demanded jointly. Example: complementary goods like pen and ink, car and petrol. Elasticity of demand for such goods is inelastic.

PROPORTION OF INCOME SPENT ON A COMMODITY

Briefly, goods with multiple uses, carrying a high price tag, and having a large number of close substitutes tend to show higher elasticity of demand than the goods which are low priced, are essentials of life and do not have close substitutes.