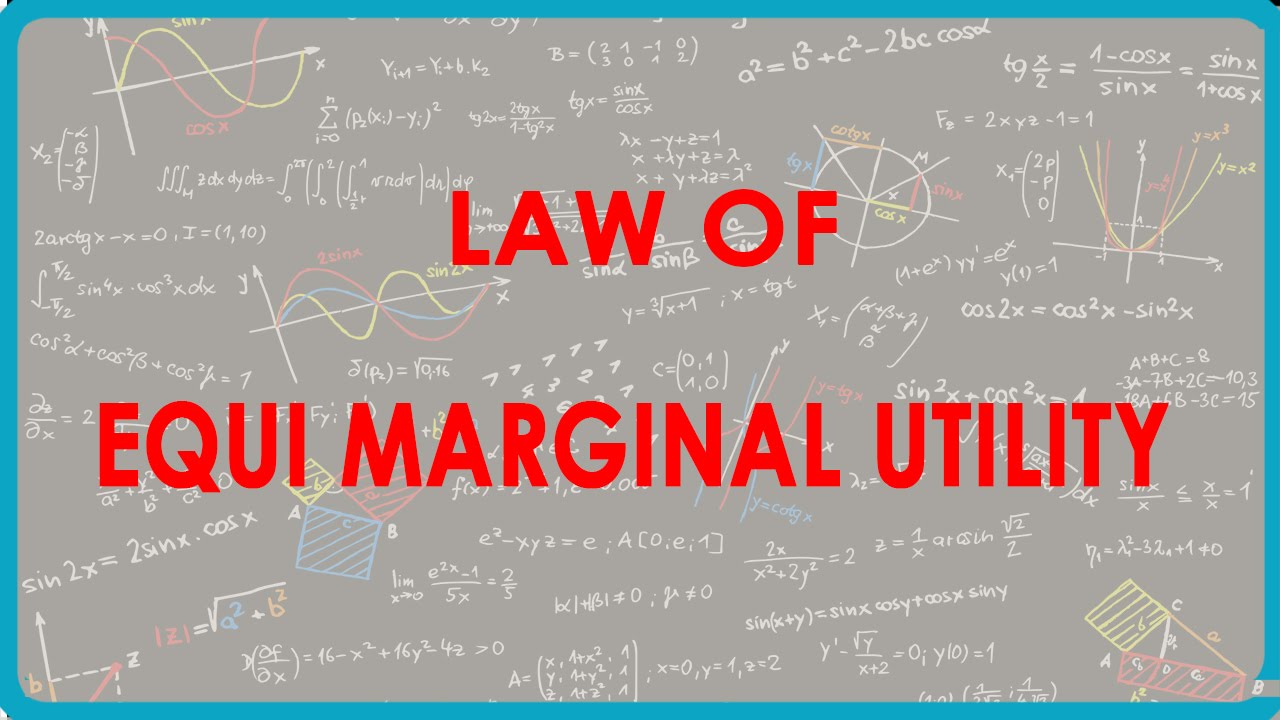 The Law of Equi Marginal Utility was presented in 19th century by an economists H. H. Gossen. This is known as Gossen’s Second law of consumption.

This law is based on the principle of obtaining maximum satisfaction from a limited income. It explains the behavior of a consumer when he consumes more than one commodity.

The law states that a consumer should spend his limited income on different commodities in such a way that the last rupee spent on each commodity yield him equal marginal utility in order to get maximum satisfaction.

ACCORDING TO PROF. HH GOSSEN

“If it is not possible to gratify all wants to the point of satisfaction, it is necessary in order to obtain maximum satisfaction, to discontinue the satisfaction of different wants at the point at which their intensity has become equal.”

ACCORDING TO PROF. ALFRED MARSHALL

“If a person has a thing which can be put to several uses, he will distribute it among these in such a way that it has the same marginal utility in all. For, if it has a greater marginal utility in one use than another, he would gain by taking some of it from second use and applying it to the first.”

ACCORDING TO PROF. J.K. MEHTA

“If a commodity can satisfy many wants within a given period of time, then in order to get greatest satisfaction from a given quantity of it, its amount should be so distributed between various wants as to make its marginal utility with reference to given period of time as nearly equal in all cases as possible.”

ACCORDING TO PROF. J.M. JOSHI

“In case of a single commodity, which can be put to several uses, the consumer will distribute it among these uses in such a way that it has the same marginal utility in all, only then his total utility will be maximum.”

ACCORDING TO PROF. LIPSEY AND PROF. STEING

“The household maximizing its utility will allocate its expenditure between commodities so that the utility of the last dollar spent on each is equal.”

ACCORDING TO PROF. J.R. HICKS

“Utility will be maximized when the marginal units of expenditure in each direction bring in the same increment of utility.”

ACCORDING TO PROF. SAMUELSON

“If the consumer has arranged his consumption so that every single good is bringing his marginal utility just exactly proportional to its price, then he would be assured that he could not better himself by departing from such equilibrium.”

This law is also known as the Law of substitution or the Law of Maxi­mum Satisfaction.

ASSUMPTIONS OF THE LAW OF EQUI MARGINAL UTILITY

As pointed out by Professor Alfred Marshall, the law of equi­-marginal utility operates only when other things being equal. These other things are assumptions of the law. They are discussed below:

(1) Rationality of the Consumer:

The law is based on the assumption that all the consumers are rational human beings and they spend their given income in such a way that maximisation of satisfaction goal is attained by them.

The law is based on the assumption that cardinal measurement of utility is possible and the measuring rod of utility is money which takes into consideration the sacrifice in terms of money and the satisfaction in terms of cardinal number of utility.

The law assumes that the marginal utility of money remains constant or it does not change during the process of spending by the consumers.

(4) Operation of the Law of Diminishing Marginal Utility:

The law of equi-marginal utility is based on the law of diminishing marginal utility and it assumes that the law holds good when various units of different commodities are consumed by the consumer.

(5) Taste, Preference, Fashion and Income of Consumer do not Change:

The law is based on the assumption that the income, taste, preference, fashion of the consumer do not change. During the course of consumption they are assumed as constant.

(6) No Change in the Prices of Related Goods:

The law is based on the assumption that the prices of related goods like substitutes and complementaries do not change during the process of consumption. If these variables change the law will not operate.

The law operates on the assumption that the goods under consumption are divisible. They can be divided into small pieces and purchased by the small units of money.

(8) The period of income and expenditure of the consumers is the same.

EXPLANATION OF THE LAW OF EQUI MARGINAL UTILITY

Each consumer aims at maximization of his satisfaction while spending his given income which has alternative uses on various goods and services, namely, food, clothing, shelter, education, sanitation and health. He arranges his wants in order of intensity and the order of satisfaction is arranged on the basis of intensity of these wants and goes on satisfying his wants till the marginal utility of all the goods is equalized in proportion to money spent on them.

In this manner he can maximize his satisfaction. He will substitute that commodity which has more utility in place of less marginal utility and he continues up to that point where the marginal utility from all goods is equalised.

The operation of the law can be understood with the example. We assume that there are Rs. 9 with a consumer and he has to allocate the amount on two commodities in such a way that in the end the marginal utility of two goods are equalized.

It can be seen from the following table:

The table reveals that the consumer has Rs. 9 which he can spend on the different commodities, namely, A and B. We also assume that the each unit of a commodity has the price of Re. 1. The various units of two commodities have been shown which gives him different marginal utilities. The MU of A and B are decreasing. He can maximise his satisfaction when he spends Rs. 5 on commodity A and Rs. 4 on commodity B.

The diagram shows that Rs. 5 have been spent on commodity A and Rs. 4 on commodity B. The bars are showing the marginal utility from different units of the commodities which are declining showing the applicability of the law of diminishing marginal utility. The last utility from the 9th and the 8th unit of money equalise the utility which is shown by equi-MU line where MUA is equal MUB (MUA = MUB) in the diagram. Thus, the consumer attains his objective.

The condition for a consumer to maximize utility is usually written in the following form:

So long as MUY/PY is higher than MUX/PX, the consumer will go on substituting Y for X until the marginal utilities of both X and Y are equalized.

IMPORTANCE OF THE LAW OF EQUI MARGINAL UTILITY

The law of substitution is of great practical importance. Everybody has got limited income. Naturally he must try to make the best use of it.

This can be done by the application of this law in the various aspects of economic life as under:

A wise consumer consciously acts on this law while arranging his expenditure. His expenditure is so distributed that the same price measures equal utilities at the margin of different purchases. Every person must try to spend his income in a manner which yields him the greatest satisfaction. This he will be able to do only if he spends his money in such a manner as to ob­tain equal satisfaction from the marginal units of money spent on the various commodities he purchases.

The law is also of great importance in production. The producer has to use several factors of production. He wants maximum net profit. For this purpose, he must substitute one factor for another so as to have the most economical combination, for example, he will substitute labour for machinery and vice versa, So that the marginal utility or marginal productivity of the two is equalised in this manner, he will get most economical combination of the ‘actors of production at his disposal to make maximum profit.

The law also applies in exchange because exchange is nothing else but substitution of one thing for another. When we sell a commodity, say, sugar, we get money. With this money, we buy another commodity, say, wheal. We have, therefore, really substituted sugar for wheat.

The Government, too, is guided by this law in public expenditure. The public revenues are so spent as to secure maximum welfare for me community. The Government must cut down all wasteful expenditure while the return is not proportionate and instead concentrate its resources on more productive or more beneficial expenditure.

The law of substitution influences prices. When a commodity becomes scarce and its price soars high, we substitute for it things which are less scarce. Its price, therefore, comes down.

CRITICISMS /LIMITATIONS OF THE LAW OF EQUIMARGINAL UTILITY

Like other economic laws, the law of equimarginal utility too has certain limitations or exceptions. The following are the main exceptions:

If the consumer is ignorant or blindly follows custom or fashion, he will make a wrong use of money. On account of his ignorance he may not know where the utility is greater and where less. Thus, ignorance may prevent him from making a rational use of money. Hence, his satisfaction may not be the maximum, because the marginal utilities from his expenditure can­not be equalised due to ignorance.

In the same manner, an incompetent organ­iser of business will fail to achieve the best results from the units of land, labour and capital that he employs. This is so because he may not be able to divert expenditure to more profitable channels from the less profitable ones.

The law has obviously no place where this resources are unlimited, as for example, is the case with the free gifts of nature. In such cases, there is no need of diverting expenditure from one direction to another.

HOLD OF CUSTOM AND FASHION

A consumer may be in the strong clutches of custom, or is inclined to be a slave of fashion. In that case, he will not be able to derive maximum satisfaction out of his expenditure, because he cannot give up the consumption of such commodities. This is specially true of the conventional necessaries like dress or when a man is addicted to some into­xicant.

Frequent changes in prices of different goods render the observance of the law very difficult. The consumer may not be able to make the necessary adjustments in his expenditure in a constantly changing price situation.

Prof. Boulding has said that for the operation of this law the goods must be of divisible nature but people in their normal life consume such commodities which are of indivisible nature, therefore, this rule may not apply. For example—Use of Radio, Watch, Motor Car etc.

Consumption of some goods is for long period where it becomes difficult to find. Out its marginal utility. For example— Use of Refrigerator, Motor Cycle etc.

Again, there are certain goods whose consump­tion is fixed portion is possible. It cannot be either increased or decreased. For example—Consumption of milk, tea, bread or butter etc. Consumer can use these commodities only up to proper quantity. Hence, this law cannot be active or can operate actively.

CONTROL OR RATIONING OF CONSUMPTION GOODS

Sometimes, government puts rationing or control over the consumption of certain commodities, then in that case the desire of the consumer is to use more goods but he cannot use it due to control or rationing.

Majority of the consumer do not prepare their family budget they on meeting expense as per their requirements. In such cases it becomes difficult to know the activeness or the use of Equimarginal Utility.