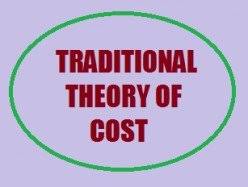 Traditional theory distinguishes between the short run and the long run. The short run is the period during which some factors is fixed; usually capital equipment and entrepreneurship are considered as fixed in the short run.

The long run is the period over which all factors become variable.

According to the traditional theory of the costs, the costs are divided into three types:

Total cost to a producer for the various levels of output is the sum of total fixed cost and total variable cost, i.e.,

TOTAL FIXED COST: Total fixed costs refer to those costs which are unable to vary. For example: land, buildings, machinery etc. Even the output is zero fixed costs will be there. Because, this cannot be variable with respect to the level of production. So, it is also called invariable cost. Since fixed costs are fixed or rigid it can be represented through a curve having horizontal shape to output axis. This can be shown with the help of following diagram:

From the curves of fixed cost and variable costs, the total cost can be derived as follows:

Average total cost is the sum of the average fixed cost and average variable cost. Alternatively, ATC is computed by dividing total cost by the number of units of output.

Average cost is also known as unit cost, as it is cost per unit of output produced. It can be shown as follows:

AVERAGE FIXED COST: AFC is the average of total fixed costs. AFC can be obtaining by dividing the total fixed cost by total quantity of output each time produced. Mathematically,

TFC will be always fixed. So AFC will reduce and never reaches zero. Its curve is as follows:

AVERAGE VARIABLE COST: AVC is the average of total variable cost. It can be find out by using the following formula.

AVC curve will be a ‘U’ shaped which is showing that when the output is raises the cost will decline, but after a certain level the cost starts to increases. That is why due to the variable proportion.

WHY AC IS U SHAPED?

In the short-run average cost curves are of U-shape. It means, initially it falls and after reaching the minimum point it starts rising upwards. It can be on account of the following reasons:

The point, where AC is minimum is called the optimum point. After this point, AC begins to rise upward. The net result is the increase in AC. Therefore, it is only due to the nature of AFC and AVC that AC first falls, reaches minimum and afterwards starts rising upward and hence assume the U-shape.

2. BASIS OF THE LAW OF VARIABLE PROPORTION

Similarly, if employ more and more variable factors are employed with fixed factors the law of Diminishing Returns is said to apply. Thus, it is due to the law of variable proportions that the average cost curve assumes the shape of U.

3. INDIVISIBILITIES OF THE FACTORS

It is the addition to total cost required to produce one additional unit of a commodity. It is measured by the change in total cost resulting from a unit increase in output. For example, if the total cost of producing 5 units of a commodity is Rs. 100 and that of 6 units is Rs. 110, then the marginal cost of producing 6th unit of. Commodity is Rs. 110 – Rs. 100 = Rs. 10. The formula for marginal cost is

This can be shown as follows:

In the long run all factors are assumed to become variable. Long-run cost curve is a planning curve, in the sense that it is a guide to the entrepreneur in his decision to plan the future expansion of his output. The long-run average-cost curve is derived from short-run cost curves.

The long run costs are categorised as follows:

Long run Total Cost (LTC) refers to the minimum cost at which given level of output can be produced. According to Leibhafasky, “the long run total cost of production is the least possible cost of producing any given level of output when all inputs are variable.” LTC represents the least cost of different quantities of output. LTC is always less than or equal to short run total cost, but it is never more than short run cost.

This can be shown as follows:

Long run Marginal Cost (LMC) is defined as added cost of producing an additional unit of a commodity when all inputs are variable. This cost is derived from short run marginal cost. On the graph, the LMC is derived from the points of tangency between LAC and SAC.