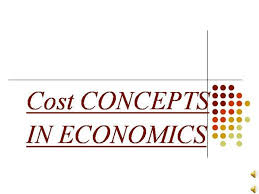 Cost refers to an amount to be paid or given up for acquiring any resource or service.

In economics, cost can be defined as a monetary valuation of efforts, material, resources, time and utilities consumed, risks incurred, and opportunity forgone in the production of a good or service.

There are various types or concept of costs which are as follows:

The term “real cost of production” refers to the physical quantities of various factors used in producing a commodity.

It is a philosophical concept which refers to all those efforts and sacrifices undergone by various members of the society to produce a commodity.

Prof. Marshall has called these costs as the “Social Costs of Production.”

“Real costs are the exertion of all the different kinds of labour that are directly or indirectly involved in making it together with the abstinence rather than the waiting required for saving the capital used in making it, all these efforts and sacrifices together will be called the real cost of production of the commodity.”

The various kinds of money costs are as follows:

Therefore, money costs relate to money outlays by a firm on factors of production which enable the firm to produce and sell a product. Every producer is interested only in nominal costs.

According to Prof. Hansen

“The money cost of producing a certain output of a commodity is the sum of all the payments to the factors of production engaged in the production of that commodity.”

Moreover, total costs of a firm include both:

Explicit costs refer to all those expenses made by a firm to buy goods directly. They include, payments for raw material, taxes and depreciation charges, transportation, power, high fuel, advertising and so on.

“Explicit costs are those cash payments which firms make to outsiders for their services and goods.”

Wages to workers, money paid for raw materials and semi-finished goods, various fixed costs etc. are examples of explicit costs. The producer takes money out of his pocket and pays to others. These are payments to attract resources from other uses to the use made by a particular producer. They are also known as Accounting Costs or Historical Costs.

Implicit costs are the imputed value of the entrepreneur’s own resources and Services. In fact, these costs refer to the implied or unnoticed costs. They include the interest on his own capital, rent on his land, wages of his own labour etc. Moreover, these costs go to the entrepreneur himself and are not recorded in practice.

“Implicit costs are the costs of self-owned, self employed resources.”

According to Prof. Lipsey

“The opportunity cost of using any factor is what is currently forgone by using it.”

According to Mrs. Joan Robinson

“The price which is necessary to retain a given unit of factor in a certain industry may be called its transfer earning or transfer price.”

According to Prof. Benham

“The opportunity cost of anything is the next best alternative that could be produced instead by the same factors or by an equivalent group of factors, costing the same amount of money.”

For instance, a farmer can grow both the potatoes as well as garlic on a farm. On a farm of two hectares, the farmer grows only potatoes and foregoes the production of garlic. Suppose, the price of the quantity of potatoes is Rs. 5000, the opportunity cost of producing the garlic will be Rs. 5000. In this way, the price of garlic which he has to forego to produce is called the opportunity cost of potatoes.

Accounting costs are those for which the entrepreneur pays direct cash for procuring resources for production. These include costs of the price paid for raw materials and machines, wages paid to workers, electricity charges, the cost incurred in hiring or purchasing a building or plot, etc. Accounting costs are treated as expenses. Chartered accountants record them in financial statements.

Sunk costs are costs which the entrepreneur has already incurred and he cannot recover them again now. These include money spent on advertising, conducting research, and acquiring machinery.

Direct costs are related to a specific process or product. They are also called traceable costs as we can directly trace them to a particular activity, product or process. They can vary with changes in the activity or product.

Indirect costs, or untraceable costs, are those which do not directly relate to a specific activity or component of the business.

For example, an increase in charges of electricity or taxes payable on income. Although we cannot trace indirect costs, they are important because they affect overall profitability.

These costs are incurred by the business in furtherance of its own objectives. Entrepreneurs spend them for their own private and business interests. For example, costs of manufacturing, production, sale, advertising, etc.

As the name suggests, it is the society that bears social costs for private interests and expenses of the business. These include social resources for which the firm does not incur expenses, like atmosphere, water resources and environmental pollution.

Production costs have been called as the total amount of money spent in the production of goods. They include the cost of raw materials and freight thereon, the costs of manufacture, i.e., the wages of workers engaged in the manufacture of the commodity and salaries of the manager and other office staff including those of peons etc.

They also include and cover other overheads expenses like—rent, interest on capital, taxes, insurance and other incidental expenses like—cost of repairs and replacements. They include both prime costs and supplementary costs.

They are especially important in the case of imperfect competition in which goods are not identical but substitutes. The manufacturers resort to what is called product differentiation in order to change the demand curve of a particular seller to his advantage.

Selling costs are an important aspect of an imperfect market and have no place in a fully competitive market where the dealers are supposed to be fully aware of the quality of the goods and the conditions of the market.

The fixed part of the semi-variable cost usually represents a minimum fee for making a particular item or service available. The variable portion is the cost charged for actual using the service.

Variable costs are costs that vary with output. Generally variable costs increase at a constant rate relative to labor and capital. Variable costs may include wages, utilities, materials used in production, etc.