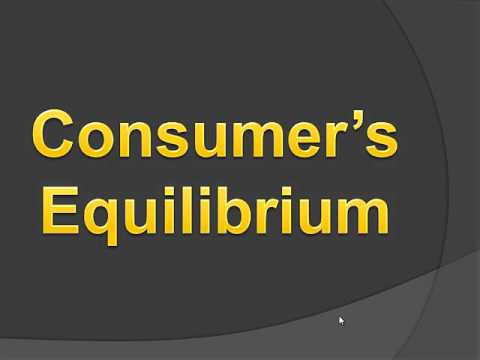 In this post you will learn about the concept of consumer equilibrium concept and equilibrium in case of one commodity and two commodities.

A consumer is said to be in equilibrium when he is buying such a combination of goods as leaves him with no tendency to rearrange his purchases of goods. Consumer equilibrium is the point of maximum satisfaction of the consumer.

He is then in a position of balance in regard to the allocation of his money expenditure among various goods.

“The consumer is in equilibrium when he maximizes his utility, given his income and the market prices.”

The following assumptions are made to determine the consumer’s equilibrium position.

It is assumed that a consumer is rational and satisfies his/her wants in order of his/her preferences. Therefore, he/she firstly prefers to purchase those goods which yield highest utility and lastly those that provide lowest utility.

This refers to one of the important assumptions of the cardinal utility approach. According to this approach, a consumer has a limited amount of income to be expended on goods selected by him/her for consumption. Therefore, in such a case when there is an objective of utility maximization along with limited income, he/she selects those goods whose consumption is unavoidable.

This implies that every rational consumer strives to maximize his/her satisfaction from the limited income.

It is assumed that utility is cardinally measureable. Therefore, utility of one unit of good equals to the units of money that a consumer is willing to pay, which means that 1 util = 1 unit of money.

It constitutes the basis for consumer behavior analysis. The utility gained falls as more and more units of a good are consumed.

It implies that whatever the level of income, the MU of money remains the same. According to this assumption, money is used as a measure of utility.

It Implies that utility is not only cardinally measurable, but can be added together to obtain the total utility. For instance, a consumer consumes X1, X2, and X3 units of good X and derives U1, U2 and U3 utils, respectively.

In such a case, the total utility derived by a consumer from n units of good X is expressed as:

The utility approach was given by Marshall. As per Marshall, utility can be measured numerically like 1, 2, 3 in simple units called UTILS and expressed in total and marginal utility. This is called CARDINAL MEASURE OF UTILITY.

A consumer may attain equilibrium in case of consumption of a single commodity as well as when he is consuming two commodities available at same and different prices. The different cases to be considered under the utility approach are described below.

In case of single commodity, the consumer is in equilibrium if the marginal utility derived from the commodity is equal to the price paid for that commodity.

TABULAR EXPLANATION: The consumer equilibrium in case of single commodity can be explained as follows:

The consumer equilibrium in case of single commodity can be explained with the help of following diagram:

The consumer’s equilibrium in case of two commodities can be explained with the help of law of equi-marginal utility. This law states that a consumer should spend his limited income on different commodities in such a way that the last rupee spent on each commodity yield him equal marginal utility in order to get maximum satisfaction.

CONDITION OF THE EQUILIBRIUM

The consumer equilibrium in case of two commodities can be explained as follows:

The table reveals that the consumer has Rs. 9 which he can spend on the different commodities, namely, A and B. We also assume that the each unit of a commodity has the price of Re. 1. The various units of two commodities have been shown which gives him different marginal utilities. The MU of A and B are decreasing. He can maximise his satisfaction when he spends Rs. 5 on commodity A and Rs. 4 on commodity B.