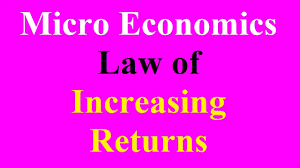 The law of Increasing Returns is also known as the Law of Diminishing Costs. According to this law when more and more units of variable factors are employed while other factors are kept constant, there will be an increase of production at a higher rate. This law is applicable to all different industries and partially applicable in agricultural sector.

STATEMENT OF THE LAW

“The tendency of the marginal return to rise per unit of variable factors employed In fixed amounts of other factors by a firm Is called the law of increasing return”.

ACCORDING TO PROF. MARSHALL

ASSUMPTIONS OF THE LAW OF INCREASING RETURNS

The law can be explained with the help of the following schedule and diagram: Schedule:

This can be explained with the help of following curve:

In the diagram the quantity of labour is measured along X-axis while the marginal production (MP) and total production (TP) are measured along Y-axis. The Marginal Production Curve is represented by MK, which is sloping up-ward showing an increase in the TP after the use of additional amount of labour. With the use of additional amount of labour, from left to the right on X-axis, MP is increased which is shown on Y-axis.

CAUSES OF APPLICABILITY OF LAW OF INCREASING RETURNS

Next, reason is the indivisibility of factors or means introduced in production. In the field of production there are certain means which cannot be used in small division or in small parts which can increase production.

In some production due to increase in the means of production. Some economies in external and internal means are studied and is enforced which leads to reduction in production cost.

4. Use of Division of Labour and Specialisation:

When large scale production is adopted. Use of division of labour and specialisation in work becomes possible. In this way the cost can be reduced and production may be increased.

5. Scientific Inventions and the Use of New Techniques:

APPLICATIONS OF LAW OF INCREASING RETURNS OR DIMINISHING COSTS

The law of increasing returns is more applicable in industrial sector than agricultural sector. But it is not applicable for a long period of time because after a certain time period its application comes to an end, and this stage is known as the optimum stage.

The law of increasing returns generally applies to manufacturing industries. Here man is not hampered by nature. He goes ahead and benefits from all sorts of economies, both internal and external. We have already discussed the economies of large-scale production. They are all available to a big manu­facturer. As he increases the scale, production becomes more and more economical. The cost of production falls, which means an increasing return.

There are several reasons on account of which the law of increasing returns operates in manufactures:

(i) There is a large scope for the introduction of machinery. What is more important is that it can be kept continuously at work. The result is that capital costs per unit of output are less.

(ii) There is ample scope for the use of specialised labour. The result is a large output, which means lowering of costs. This means increasing returns.

(iii) The manufacturing industries, being generally on a large scale, are able to realise economies of scale, both internal and external. These economies relate to buying and selling, economy in administration, publicity and salesman­ship, benefit of research and experiments, financial, technical and managerial economies, etc.

(iv) Unlike agriculture, interruptions in work from natural disturbances, like changes in weather and seasons, are on a minor scale. Hence there are no costly breakdowns. Production is smooth and economical, which means increasing returns.

(v) The operations are carried on within a small area so that supervision is easy and effective. There is little waste of materials and spoiling of machinery. Expert guidance and advice are always at hand. Hence production is carried on economically.

It is on account of all these reasons that the law of increasing returns operates in industry. But the business cannot go on expanding itself indefinitely. There comes a time when economies change into diseconomies as the business becomes unwieldy.

LIMITATIONS OF THE LAW OF INCREASING RETURNS

Important limitations of the Law of Increasing Returns are as follows:

1. If the size of the production unit is large and efficient management is not possible, then in this area the Law of Increasing Return will not operate.

2. If the machines and other instruments and tools are old even by increase in labour and capital the Law of Diminishing Return will apply.

3. If the industry needs rationalisation and division of labour, and if this is not introduced or followed, then in place of increasing return Law of Diminishing Return will operate.

4. If the industry is based on nature, then Law of Increasing Return will not operate.

5. If the use of advertisement is not adopted the use of Law of Increasing Return is not possible.

2 thoughts on “LAW OF INCREASING RETURNS”