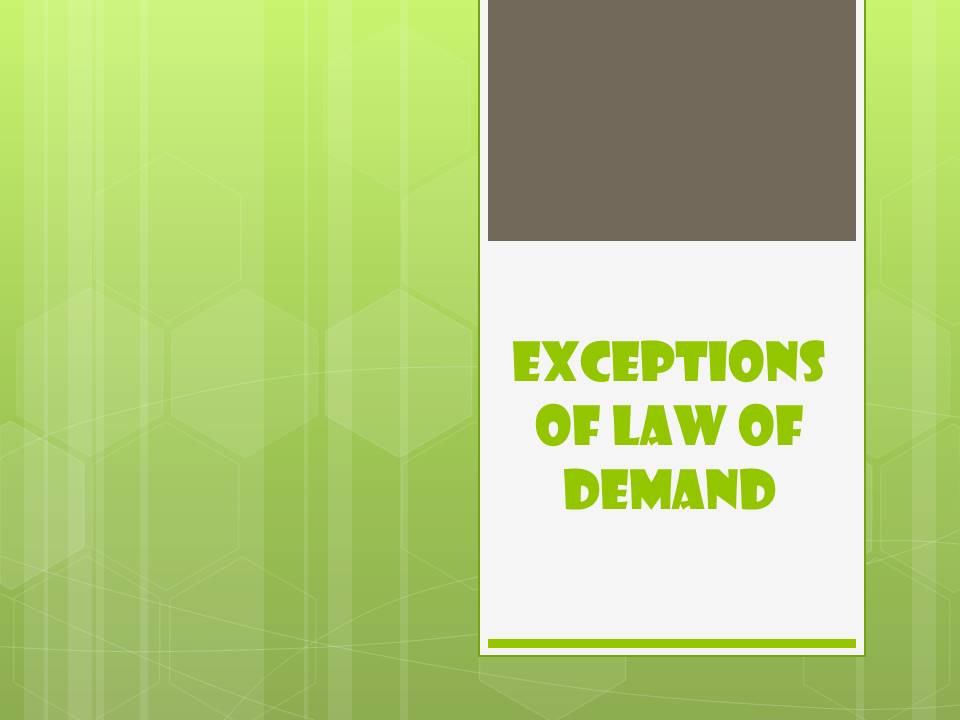 EXCEPTIONS OF LAW OF DEMAND

Demand is that specific quantity of a commodity which the consumer purchases at a specific price during a specified time period.

“Demand refers to the quantities of commodity that the consumers are able and willing to purchase at each possible price during a period of time, other things being equal.”

EXCEPTIONS OF LAW OF DEMAND

VEBLEN GOODS OR ARTICLES OF DISTINCTION

Such commodities which are considered as symbol of status and known as Articles of Distinction. This exception was first explained by the American Economist Veblen. That is why; these articles or goods are known as Veblen goods. Such commodities are generally consumed by the rich. The higher the price of these goods, the more will be their demand and vice versa. This makes the demand curve slopes upward.

Many times, the consumer thinks that the cheap commodity is inferior commodity. Hence the consumers purchase less if its price is low. On the contrary, if the price rises, the consumer takes it as superior in quality and purchases more of it. This makes the demand curve slopes upward and law of demand fails.

The concept of these goods was given by Sir Robert Giffen. At his name, these goods are known as Giffen Goods. Giffen goods are highly inferior goods, showing a very high negative income effect. As a result, when price of such commodities falls, their demand also falls, even when they happen to be relatively cheaper than other goods. This is popularly known as ‘Giffen Paradox’.

In short, it can be said that the law of demand applies only when all its assumption holds good. Otherwise it fails.