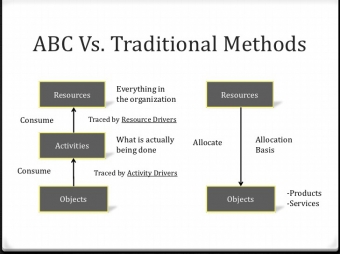 The difference between Traditional costing vs ABC costing is as follows:

Traditional costing is the allocation of factory overhead to products based on the volume of production resources consumed. Under this method, overhead is usually applied based on either the amount of direct labor hours consumed or machine hours used. The trouble with traditional costing is that factory overhead may be much higher than the basis of allocation, so that a small change in the volume of resources consumed triggers a massive change in the amount of overhead applied. This is a particularly common issue in highly automated production environments, where factory overhead is quite large and direct labor is close to nonexistent.

The Activity-Based Costing (ABC) is a costing system, which focuses on activities performed to produce Products. ABC is that costing in which costs are first traced to activities and then to products.

Activity-based costing (ABC) is mostly used in the manufacturing industry since it enhances the reliability of cost data, hence producing nearly true costs and better classifying the costs incurred by the company during its production process.

Activity-based costing was developed to circumvent this issue with traditional costing, using a more detailed analysis of the relationship between overhead costs and cost drivers. Many cost drivers may be used to create a more well-founded allocation of overhead costs.

Traditional costing still works well for financial statement reporting, where it is simply intended to apply overhead to the number of produced units for the purpose of valuing ending inventory. There is no consequence from a management decision-making perspective.