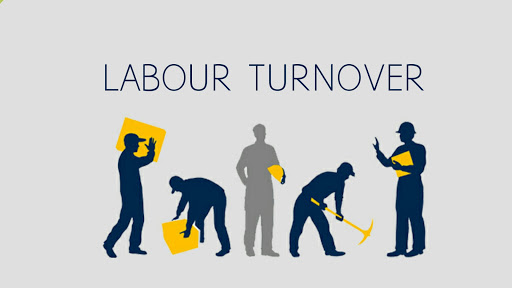 Labor Turnover of an organization is change in the labor force during a specified period measured against a suitable index.

Labor turnover is the ratio of the number of persons leaving in a period to the average number employed. It is the change in the composition of the labor force in an organization. It can be measured by relating the engagements and losses in the labor force to the total number employed at the beginning of the period. All the losses must be taken into account regardless of the cause for leaving.

The rate of Labor Turnover in an industry depends upon several factors such as, nature of the industry, its size, location and composition of the labor force. A controlled level of Labor Turnover is considered desirable because it helps the firm to adjust the size of its labor force in response to needs such as for seasonal changes or changes in technology.

If 20 employees leave an organization in a year and the average labor force is 400, then the labor turnover is 5%.

The main causes of labor turnover in an organization/industry can be broadly classified under the following three heads:

Personal Causes: Personal causes are those which induce or compel workers to leave their jobs such causes includes the following:

In all the above cases the employee leaves the organization at his will and, therefore, it is difficult to suggest any possible remedy in the first three cases. But the last one can be overcome by creating conditions leading to a healthy working environment. For this, officers should play a positive role and make sure that their subordinates work under healthy working conditions.

Unavoidable causes: These are those under which it becomes obligatory on the part of management to ask some or more of their employees to leave the organization, such causes are summed up as listed below:

Avoidable causes: These are those causes which require the attention of management on a continuous basis so as to keep the labor turnover ratio as low as possible. The main causes under this case are indicated below:

The following are the various methods to measure the labor turnover:

This method considers, and gives importance only to the number of separations, without reference to the replacements. Accordingly, we get the separation rate under this method. If, for instance, the total number of workers on rolls during the year under review was 10,000 and the number of leaving is 500, the turnover rate would be:

Under this method, number of employees added during a particular period is taken into consideration for computing the Labor Turnover.

Increasing Labor Turnover is a double edged malady. It reduces the productivity of labor and resulting in high costs. The cost of Labor Turnover may be analyzed under two broad headings:

Preventive Costs refer to all those items of expenditure which are incurred in order to keep the workers satisfied and thus to act as discouragement against leaving employment. Preventive Costs may be further grouped under the following heads:

1. Personnel administration: Most concerns would have a Personnel Department which is entrusted with recruitment, training, and other problems arising out of the employment of the labor force. Obviously, the entire expenditure of the department cannot be treated as labor turnover costs but a portion of the costs which related to the efforts of the Personnel Manager in maintaining good relationship between the management and the staff should be treated as Preventive Labor Turnover Cost. The labor force remains satisfied if properly looked after and if grievances are sympathetically considered.

2. Medical Service (Preventive and Curative) Care for own health and that of family members gets prior consideration with the workers who prefer those concerns where medical services are available. Further, a healthy worker is an asset of the firm as he is able to make substantial contribution towards higher efficiency and productivity.

3. Welfare activities and Schemes: These include facilities like subsidised canteens, co-operative store, laundry and washing services, sports, housing schemes, transport, and educational facilities. These facilities are as good as higher wages offering incentive to the worker to stay with the firm.

4. Miscellaneous Schemes such as Pension or Provident Fund Schemes, Bonus, High Wage and Other Incentive Schemes Greater the advantage these prerequisites offer, the lower will be the rate of Labor Turnover.

Replacement Costs are those costs which are incurred for the recruitment and training of new hands and the resulting losses, wastages and lowering of productivity due to the inexperience and inefficiency of the new labor force. Replacement Costs consist of the following:

1. Loss of output due to delay in obtaining new workers :As suitable workers may not be available readily, there is a time gap before a new worker can replace the old one. During this period, some output may be maintained by retaining surplus labor force to meet such contingencies or by working overtime. All such extra cost should be taken as labor turnover cost.

2. Employment Department Expenses: With the increase in the tempo of recruitment, additional work is thrown on the Employment or Personnel Department. Administrative expenditure is incurred for the selection, test and medical examination of the new hands for writing initial document like service records, fund accounts, etc.

3. Induction Training for new workers: Unless skilled workers are recruited (more likely on higher rates of pay ) who can be at right way put on jobs, the average worker has to be given some induction training before he is fit to be put on his assigned work. For certain categories of skilled and highly skilled jobs, intensive training for some period may be essential.

5. Cost of tool and machine breakage: While on training and the initial stages of work after completion of training, the worker is likely to break tools more frequently on account of his inexperience.

6. Cost of Scrap and Defective Work: A new worker is likely to spoil work and although in most cases responsibility can be fixed on him and no wages paid for the scrapped work, the expenditure incurred on material and wages for the earlier operations done on the job becomes waste.

7. Cost of Accidents: On account of his inexperience, the new worker is apt to disregard safety rules and he is thus more prone to accidents. It may be noted that the increases in labor costs due to high Labor Turnover contribute to create an inflationary trend in the industry.

The following steps are useful for minimising labor turnover.

1. Exit Interview: An interview may be arranged with each outgoing employee to ascertain the reasons of his leaving the organization.

4. Enlightened attitude of management : The management should introduce the following steps for creating a healthy working atmosphere. Service rules should be framed, discussed and approved among management and workers, before their implementation. Provide facilities for education and training of workers. Introduce a procedure for settling workers grievance.

5. Use of Committee: Issues like control over workers handing their grievances etc., may be dealt by a committee, comprising of members from management and workers.