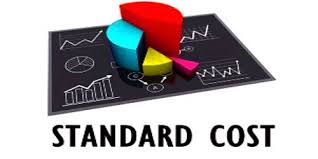 Standard costing is a cost accounting technique which compares the results of actual production with the basic standard, as anticipated, in terms of costs so as to determine the reasons for discrepancies between the anticipated and actual costs.

ACCORDING TO W W BIGG

“Standard costing discloses the cost deviations from standard and classifies these as to their causes, so the managements are immediately informed of the spheres of operations in which remedial action is necessary.”

ACCORDING TO ICMA, LONDON

“The preparation and use of standard costs, their comparison with actual costs and the analysis of variances to their causes and points of incidence.”

ACCORDING TO J. BATTY

“Standard costing is the system of cost accounting which makes use of predetermined standard cost relating to each element of cost-materials, labour and expenses, for each line of product manufactured of service applied.”

ACCORDING TO BLOKER AND WELTMER

“Predetermined costs, based upon engineering specifications and representing highly efficient productions for quantity standard and forecast of future market trends and price standards, With a fixed amount expressed in dollars for material, labor and for an estimate quantity of production.”

ACCORDING TO W. B. LAWRENCE

ACCORDING TO BROWN AND HOWARD

“Standard costing may be defined as a technique of cost accounting which compares the standard cost of each product of service with the actual cost to determine the efficiency of the operation, so that any remedial action may be taken immediately.”

The technique of standard costing can be useful in all types of industries, but it is more commonly used in industries producing standardized products which are repetitive in nature.

The following are the various standards used in standard costing:

Current standard is a standard established for use over a short period of time, related to current conditions. The problem with this type of standard is that it does not try to improve on current levels of efficiency.

Ideal standard is a standard which can be attained under the most favourable conditions. No provision is made, e.g., for shrinkage, spoilage or machine breakdowns. Users believe that the resulting unfavourable variances will remind management of the need for improvement in all phases of operations. Ideal standards are not widely used in practice because they may influence employee motivation adversely.

Attainable standard is a standard which can be attained if a standard unit of work is carried out efficiently, on a machine properly utilized or material properly used. Allowances are made for normal shrinkage, waste and machine breakdowns. The standard represents future performance and objectives which are reasonably attainable.

Importance of Standard Costing cannot be ignored for the following and that is why the same is well-developed in the present-day world:

(i) Compilation of Historical Cost is very expensive and difficult:

A manufacturing firm making large number of parts requires too much clerical work which is required in order to compile the materials, labour and overhead charges to each and every cost of parts produced for ascertaining the average cost of the product.

In order to measure the manufacturing efficiency, historical costs are not practically adequate. It fails to explain the reasons of increased cost or any change in cost structure.

(iii) Historical Costs are too old:

In many firms, costs are determined and selling prices are ascertained even before the production starts—which is not desirable.

(iv) Historical Costs are not typical:

This is due to the wide fluctuation in market for which there is no relation between the selling price per unit and cost price per unit.

The most important objective of standard cost is to help the management in cost control. It can be used as a yardstick against which actual costs can be compared to measure efficiency. The management can make comparison of actual costs with the standard costs at periodic intervals and take corrective action to maintain control over costs.

The second objective of standard cost is to help the management in exercising control over the costs through the principle of exception. Standard cost helps to prescribe standards and the attention of the management is drawn only when the actual performance is deviated from the prescribed standards. It concentrates its attention on variations only.

Another objective of standard cost is to make the entire organisation cost conscious. It makes the employees to recognise the importance of efficient operations so that costs can be reduced by joint efforts.

Budget planning is undertaken by the management at different levels at periodic intervals to maximize the profit through different product mixes. For this purpose it is more convenient using standard costing than actual costs because it is done on scientific and rational manner by taking into account all technical aspects.

The steps involved in standard costing are as follows:

First and foremost, the standards are to be set on the basis of management’s estimation, wherein the production engineer anticipates the cost. In general, while fixing the standard cost, more weight is given to the past data, the current plan of production and future trends. Further, the standard is fixed in both quantity and costs.

After standards are set, the actual cost for each element, i.e. material, labour and overheads is determined, from invoices, wage sheets, account books and so forth.

Next step to the process, is to compare the standard cost with the actual figures, so as to ascertain the variance.

Once the comparison is done, the next step is to find out the reason for the variances, to take corrective actions and also to evaluate the overall performance.

The last step to this process, is the disposition of variances by transferring it to the costing profit and loss account.

Standard costing can be helpful in ascertaining the profitability of the business at any level of production. Further, it is also useful in practical management functions, i.e. planning and controlling.

The advantages of standard costing are given below:

The disadvantages of standard costing are given below.

It is very difficult to establish standard costs of materials, labor and overheads. So, sometimes in accurate and out of date standards are set which do more harmful than any benefit as they provides wrong yardsticks.

This system is expensive so small concerns may not afford to bear the costs. Establishment of standard costing requires high degree of technical skill.

Standard costing system controls the operating part of an organization only as it ignores the other aspects like quality, lead time, service, customer’s scarification and so on.

Conditions of the business are changing. Hence, standard must be revised form time but it us very difficultly bringing changes in standard and is also expensive. Non-flexible standard loose their importance.

One of the chief problems faced in the operation of the standard costing system is the precise estimation of likely prices or rate to be paid.

In case of industries that have frequent technological changes affecting the conditions of production, standard costing may not be suitable.

STANDARD COSTING- TOOL IN HANDS OF MANAGEMENT FOR DECISION MAKING

Standard costing technique as a management tool is an aid in making predictions and providing Standards for measuring business performance.

It helps the management in the following ways:

1) Formulation of Pricing and Production Policies

Standard Costing helps the management to formulate pricing and production policies on the basis of estimated costs to be incurred. Estimated production and its cost provide the base for pricing policy and profit planning.

With standard costing, Delegation of Authority can be successfully implemented as top managers can delegate responsibility according to the standards fixed.

3) Facilitation of Principle of Management by Exception

Standard Cost System works on the basis of principle of management by exception. Management needs to give concentration only on those areas where deviations occur, i.e., Actual performance is more or less than standards.

Standard Costing gives a suitable base for comparison of actual performance with predetermined standards. Standards can be fixed for any element of cost e.g., material, labour, overheads etc.

5) Optimum Use of Resources

Standard Cost also helps in optimum use of resources. Different resources like raw material, plant and machinery and current assets are used according to the standards fixed in advance.

Under Standard Cost System, valuation of stock is done at standard cost. The variance account is opened for transferring the deviations between standards and actual performance. This brings uniformity in valuation of stock.

When standards are fixed, the performance of various departments e.g., production, sales, purchase etc., is considered. In this way, standard costing enables coordination among all departments.

Standard Costing is an effective tool in controlling cost because actual performance is compared with standards and in case of deviations, corrective action is taken.

When standards are fixed Incentive schemes to motivate employees can be introduced. Employees try to achieve the standards and they are remained different monetary and non-monetary incentives.

These prerequisites can be put as follows:

Acceptance of the System

The standard costing system can have the desired effects only when the system is acceptable both to the management as well as to the workers. The management should take sufficient interest in the system to make it effective. Similarly the workers should also believe that in the long run, the system would be beneficial to all of them. This is possible by fixing the standards in a way that they are capable of being achieved by an average worker.

The standards should be fixed after a careful study of all technical processes and operations of the business. They should be fixed judiciously and should not be ideal but capable of being achieved. Setting of standards at too high a level will create resentment among the workers and depress their performance while setting of standards at too low a level will have adverse effects on personal initiative and costs. It will be appropriate to fix the responsibility of setting standards on a committee consisting of important persons such as Production Controller, Purchase Manager, Personnel Manager, Cost Accountant etc.

The successful operation of standard costing system requires existence of well qualified and trained staff for fixing the standards, measuring performance and reporting variances to different levels of management. The reports submitted help the management in applying the principle of “management by exception” which means that the management pays attention only to those cases where performance is below or above the standard.

Existence of budgetary control system is a pre-requisite for the standard costing system. Budgets fix the targets which the executives have to achieve. They create a sense of discipline, financial or otherwise, among employees at different levels. Budgets are projections for the future and therefore they are of great use to the effective functioning of the standard costing system.

Proper Delegation of Authority and Responsibility