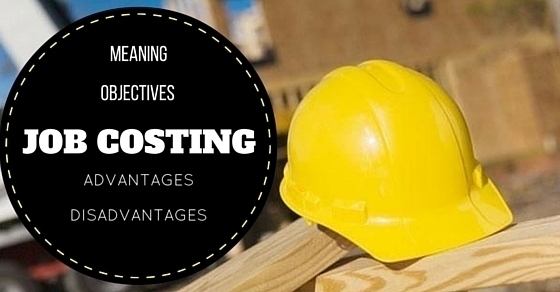 Job costing or job order costing also called specific order costing is a method of costing which is used when work is undertaken as per the customer’s special requirement (tailor-made).

ACCORDING TO INSTITUTE OF COST AND MANAGEMENT ACCOUNTANTS, LONDON

“Job costing is that form of specific order costing which applies where work is undertaken to customer’s specific requirements and each order is of comparatively of short duration.”

Under this method of costing, each job is considered to be a distinct cost unit. As such, each job is separately identifiable. In the case of a job, work is usually carried out within the factory or workshop. Sometimes, a job is accomplished even in the customer’s premises.

Job costing is employed in the following cases:

1. Each job has its own characteristics, depending up on the special order placed by the customer.

2. Each job is treated as a cost unit.

3. A separate job cost sheet is made out for each job on the basis of distinguishing numbers.

4. A separate work in progress ledger is maintained for each job.

5. The duration of the job is normally a short period.

6. Profit or loss is determined for each job independently of others.

The following are the advantages of Job costing:

It helps management to detect which jobs are profitable and which are not. Estimates of cost for similar work in the future may be conveniently made on the basis of accurate record of job costs. This assists in the prompt furnishing of price quotations for specific jobs.

The cost of materials, labour and overhead for every job or product in a department is available regularly and periodically, enabling the management to know the trend of cost and thus by suitable comparison, to control the efficiency of operations, materials and machines.

The adoption of predetermined overhead rates in job costing necessitates the application of a system of budgetary control of overheads with all the advantages.

Spoilage and defective work can be easily identified with specific jobs or products so that responsibility may be fixed on departments or individuals.

Job costing is particularly suitable for cost plus and such other contracts where selling price is determined directly on the basis of costs.

The cost of material, labour and overhead for every job or product in a department is available daily, weekly or as often as required while the job is still in progress.

NO DELAY IN COST ASCERTAINMENT

On completion of a job, the cost under each element is immediately ascertained. Costs may be compared with the selling prices of the products in order to determine their profitability and to decide which product lines should be pushed or discontinued.

Historical costs for past periods for each product, compiled by orders, departments, or machines, provide useful statistics for future production planning and for estimating the costs of similar jobs to be taken up in future. This assists in the prompt furnishing of price quotations for specific jobs.

ANALYSIS OF VARIANCES IN COSTS

The actual overhead costs are compared with the overhead applied at predetermined rates; thus, at the end of an accounting period, overhead variances can be analyzed.

1. It helps in finding out the cost of production of every order and thus helps in ascertaining profit or loss made out on its execution. The management can judge the profitability of each job and decide its future course of action.

2. It helps management in making more accurate estimates about the costs of similar jobs to be executed in future on the basis of past records. The management can conveniently and accurately determine and quote prices for orders of a similar nature which are in prospect.

3. It enables management to control operational inefficiency by comparing actual costs with the estimated ones.

The following is the procedure adopted for costing purposes in a concern using job costing:

When an order has been accepted, an individual work order number must be assigned to each such job so that separate orders are capable of being identified at all stages of production. Assignment of job numbers also facilities reference for costing purposes in the ledger and is conveniently short for use on various forms and documents.

The Production Control Department then makes out a production order thereby authorising to start work on the job. Several copies of production order are prepared, the copies often being in different colours to distinguish them more easily. These copies are passed on to the following:

(i) All departmental foremen concerned with the job;

(ii) Storekeeper for issuance of materials; and

The columns provided in the production order differ widely, depending largely upon the nature of production.

Job cost sheet is the most important document used in the job costing system. A separate cost sheet or card is maintained for each job in which all expenses regarding materials, labour and overheads are recorded directly from costing records. Job cost sheets are not prepared for specific periods but they are made out for each job regardless of the time taken for its completion. However, material, labour and overhead costs are posted periodically to the relevant cost sheet.

Costs for various jobs are collected on the following basis :

(d) Overheads: Overheads may be charged to each job on the basis of any of the methods of overhead absorption.

A completion report is sent to the costing department after the completion of job. The actual cost recorded in the job cost sheet is compared with the estimated cost. It will reveal the efficiency or inefficiency in operation. It is a guide to the future course of action.

Profit or loss on each job can be determined by comparing the actual cost with the price obtained.

Job costing suffers from certain limitations. These are as follows.

In spite of the above limitations, it can be said that job costing is an extremely useful method for computation of the cost of a job. The limitation of time consuming can be removed by computerization and this can also reduce the complexity of the record keeping.