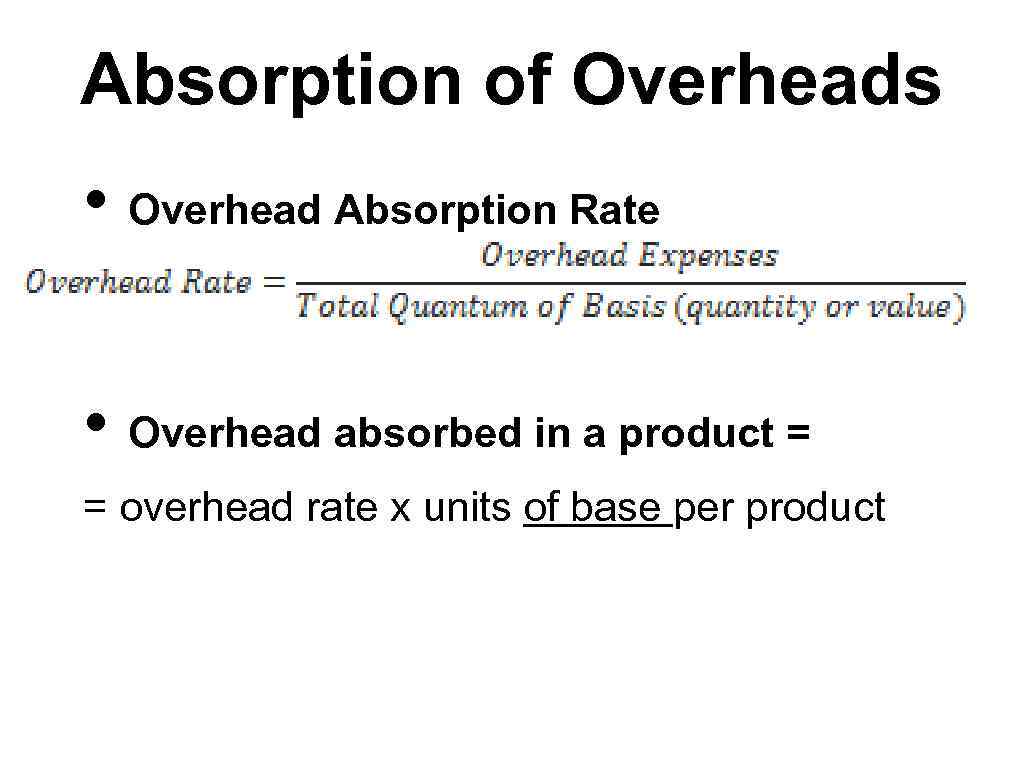 Absorption of overheads refers to the process of recovering allocated cost to a particular cost centre by the units produced in that cost centre.

Absorption of Overheads means the distribution of the overhead expenses allotted to a particular department over the units produced in that department. Overhead absorption is accomplished by overhead rates. Absorption of overheads may also be defined as recording of overheads in Cost Accounts on an estimated basis with the help of a predetermined overhead rate, which is computed at normal or average or maximum capacity.

In order to determine the absorption of overhead in costs of jobs, products or process, a rate is calculated and it is called as “Overhead Absorption Rate” or “Overhead Rate.” The overhead rate can be calculated as below:

The overhead rate of expenses for absorbing them to production may be estimated on the following three basis:

This is also known as historical overhead rate. This rate is obtained by dividing the overhead expenses incurred during the accounting period by the actual quantum (quantity/value) of the base selected. This rate is determined as follows:

This method suffers from the following limitations:

(i) Actual overhead rate cannot be determined until the end of the period.

(ii) Seasonal or cyclical influences cause wide fluctuations in the actual overhead cost and actual volume of activity.

(iii) Actual cost is generally used for comparison with the predetermined figures for the purpose of control. Thus, it is useful only when compared with the established norms or standards.

This computation of a pre-determined overhead rate is more practical and has the following advantages:

(ii) In those concerns where the budgetary control system is in operation, all the data for the purpose of calculation of pre-determined overhead rate is available without any extra clerical cost.

(iii) It is useful when cost plus contracts are undertaken.

Blanket overhead rate refers to the use of one single or general overhead rate for the whole factory. The blanket rate is used in those factories:

(a) Where only one major product in continuous process is being produced.

(b) Where several products are produced it can be applied only if:

This rate is calculated as follows:

When different rates are computed for each producing department, service department, cost centre, each product or product line, each production factor, and for fixed overhead and variable overhead, then they are known as multiple rates. It is calculated as under:

It includes all the indirect costs incurred in factory in respect of manufacturing operations. It includes the cost of indirect materials and indirect labor.

The following are the main methods of absorption of manufacturing or factory overheads:

(a) Direct Material Cost Method: Under this method percentage of factory expenses to value of direct materials consumed in production is calculated to absorb manufacturing overheads.

If in a factory the anticipated cost of direct material is Rs. 4,00,000 and the over head budgeted expenses are Rs. 1,00,000, then the overhead rate will be 25% i.e.( Rs.1,00,000 ÷ Rs.4,00,000) of the materials used. It is assumed that relationship between materials and factory expenses will not change. This method is simple and can be adopted under the following circumstances:

(b) Direct Labor Cost (or Direct Wages) Method: This is a simple and easy method and widely used in most of the concerns. The overhead rate is calculated as under:

This method is suitable under the following situations:

In some concerns a separate rate is calculated for the fringe benefits and applied on the basis of direct labour cost.

(c) Prime Cost Method: Under this method the recovery rate is calculated dividing the budgeted overhead expenses by the aggregate of direct materials and direct labour cost of all the products of a cost centre.

(d) Direct Labour (or Production) Hour Method: This rate is obtained by dividing the overhead expenses by the aggregate of the productive hours of direct workers. The formula is

This rate is suitable where:

(e) Machine Hour Rate: Machine hour rate is the cost of running a machine per hour. It is one of the methods of absorbing factory expenses to production. There is a basic similarity between the machine hour and the direct labour hour rate methods, in so far as both are based on the time factor. The choice of one or the other method depends on the actual circumstances of the individual case. In respect of departments or operations, in which machines predominate and the operators perform a relatively a passive part, the machine hour rate is more appropriate. This is generally the case for operations or processes performed by costly machines which are automatic or semi-automatic and where operators are needed merely for feeding and tending them rather than for regulating the quality or quantity of their output. In such cases, the machine hour rate method alone can be depended on to correctly apportion the manufacturing overhead expenses to different items of production. What is needed for computing the machine hour rate is to divide overhead expenses for a specific machine or group of machines for a period by the operating hours of the machine or the group of machines for the period. It is calculated as follows:

The following steps are required to be taken for the calculation of machine hour rate:

1) Each machine or group of machine should be treated as a cost centre.

2) The estimated overhead expenses for the period should be determined for each machine or group of machines.

3) Overheads relating to a machine are divided into two parts i.e., fixed or standing charges and variable or machine expenses.

4) Standing charges are estimated for a period for every machine and the amount so estimated is divided by the total number of normal working hours of the machine during that period in order to calculate an hourly rate for fixed charges. For machine expenses, an hourly rate is calculated for each item of expenses separately by dividing the expenses by the normal working hours.

5) Total of standing charges and machines expenses rates will give the ordinary machine hour rate.

Some of the expenses and the basis of apportionment are given below.

(f) Rate Per Unit of Production: This method is simple, direct and easy. It is suitable for mining and other extractive industries, foundries and brick laying industries, where the output is measured in convenient physical units like number, weight, volume etc. the rate is calculated as under:

Example: If the overhead expenses (budgeted) are Rs. 30,000 and the budgeted production is 10,000 tonnes, then overhead rate according to this method will be Rs. 3 per tonne.

The main limitation of this method is that it is restricted to those concerns which produce only one item of product or a few sizes, qualities or grades of the same product. If more than one item are produced, then it is essential to express dissimilar units against a common denominator on weightage or point basis.

This method is more suitable for apportioning of administration, selling and distribution, research, development and design costs of products. It can also be used with advantage for the appropriation of joint products costs.

Administrative expenses bear only a remote relationship either to the manufacturing or to the selling functions. The administrative divisions being responsible only for laying down general policies of the company, its benefits, by and large, are intangible and hence difficult to measure. Also, administrative expenses are generally period costs are constant; they are not affected by any fluctuations in the volume of production of sales activity. A careful watch over the variable administrative expenses, e.g., postage, stationery, office maintenance and upkeep, office transport, repairs, etc., is nevertheless necessary since top executives may sometimes overlook the need for exercising strict economy in expenses with which they themselves are concerned.

There are three distinct methods of accounting for administrative overheads.

Apportioning between production and sales departments

This method recognises only two basic functions of a manufacturing concern, i.e. manufacturing and selling and distribution. Thus, administrative overheads are apportioned over production and sales departments.

Therefore, each of the department should be charged with the proportionate share of them. When this method is adopted, administrative overheads lose their identity and get merged with production and selling and distribution overheads.

Treating administrative overheads as a separate addition to the cost of jobs or products.

This method considers administration as a separate function like production and sales and, as such costs relating to formulating the policy, directing the organisation and controlling the operations are taken as a separate charge to cost of the jobs or a product, sold along with the cost of other functions. The following bases may be adopted for such absorption:

ABSORPTION OF SELLING AND DISTRIBUTION OVERHEADS

Selling costs or overhead expenses are those incurred for the purpose of promoting the marketing and sales of different products. Distribution expenses, on the other hand, are expenses relating to delivery and dispatch of goods sold.

Absorption of selling and distribution expenses

If selling and distribution expenses are small, they may be included in office expenses. If these expenses are considerable, one of the following magnitudes may be followed:

In this method, on the basis of past year’s experience the percentage of selling expenses to works cost is ascertained and used for finding out the selling and distribution expenses to be charged to each job or product. This method can be followed successfully if one product is produced or where selling expenses are small though various articles are produced. The method will not take into consideration different efforts involved in selling unless the effort is in the same proportion as the cost of production.

A percentage on the selling price

From an analysis of past year’s accounts one can determine the percentage which normal selling and distribution expenses bear to the normal turnover. Suppose, on the basis of the previous year’s experience it is ascertained that selling expenses are 10% of the turnover, and the cost of production is 9,000, then (10/ 100- 10)= 10/90 or 1/9 of the cost of production will be charged as selling and distribution expenses. This method can be followed in those cases, where the products are sold at fixed prices and the selling price of each article is known. If prices fluctuate, the method will not give good results.

An estimated rate per unit