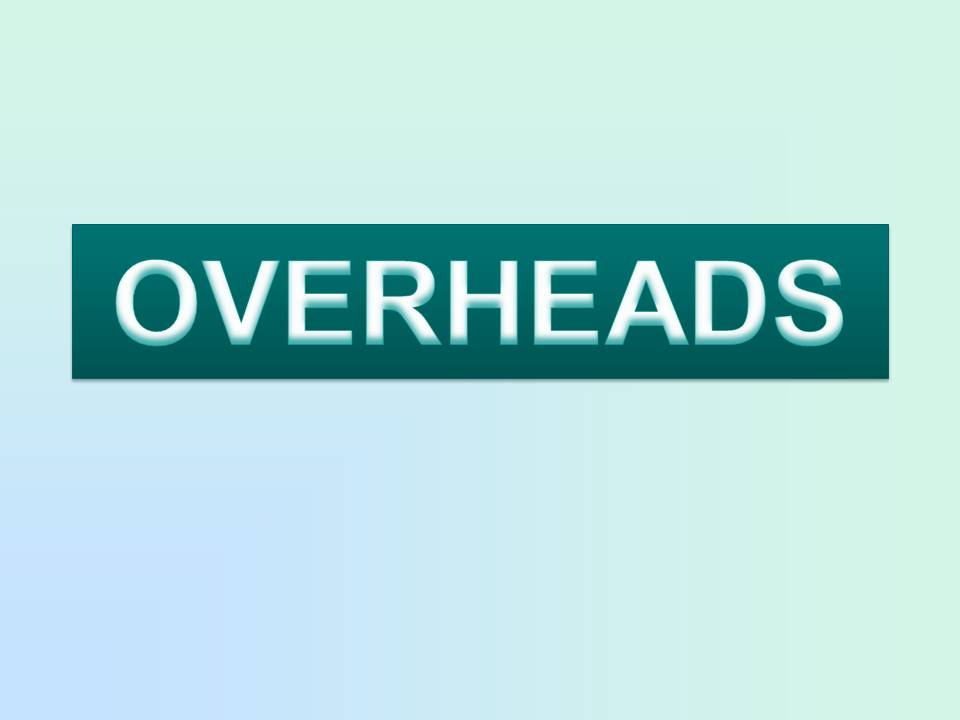 These are those costs which cannot be allocated accurately but can be apportioned and absorbed to the cost centers or cost units. Overheads costs are also known as ‘ Supplementary costs’, ‘Non-productive costs’, ‘Indirect costs’ etc.

ACCORDING TO BLOCKER AND WELMER

“Overhead costs are the operating cost of a business enterprise which cannot be traced directly to a particular unit of output.”

“Overhead may be defined as the cost of indirect materials and such other expenses, including services as cannot conveniently be charged directly to specified cost units. Alternatively, overheads are all expenses other than direct expenses.”

ON THE BASIS OF FUNCTION

1.Factory overheads: It includes all the indirect costs incurred in factory in respect of manufacturing operations. It includes the cost of indirect materials and indirect labor.

3.Selling and Distribution overheads: These include all the indirect costs which are incurred for

These costs play an important role in growing the business and its goodwill.

ON THE BASIS OF ELEMENTS

3.Indirect Expenses or Overheads:  Expenses which cannot be allocated to the cost centers or units but can be apportioned by them are known as overheads or indirect expenses.

ON THE BASIS OF BEHAVIOR

1.FIXED OVERHEADS: A fixed cost is a cost which is incurred for a particular period of time and which, within certain activity levels, is unaffected by changes in the level of activity. These costs mainly depends upon the effluxion of time and do not vary directly with the changes in the volume or output or sales. Example: rent of the building, insurance of the building etc.

2.VARIABLE OVERHEADS: A variable cost is a cost which tends to vary with the level of activity. These costs tend to increase or decrease with the rise and fall in the production or sales. These costs vary in total but per unit cost remains the same. Example: cost of raw material used in producing finished product.

In case of classification of costs on the basis of the activity or behavior, the problem faced by the cost accountant is of segregating the semi-variable costs into fixed portion and variable portion. For this following methods can be used:

Variable cost per unit= Change in expense/ Change in Output

In month of July

This method of segregating semi-variable costs is easy but not scientific and accurate.

2.RANGE METHOD: This method is also known as High and Low Points method. Under this method, the amount of expense at the highest and lowest levels are compared and related to output attained at those levels. As the amount of fixed overheads remains the same, the change in indirect cost is due to the variable portion.

VARIABLE COST PER UNIT= Change in amount of expense/ Change in output.

VARIABLE COST PER UNIT= Change in amount of expense/ Change in output.

x= Output or number of units.

Taking the figures of July and August

Putting the value of ‘m’ in equation (i)

4.AVERAGE METHOD: Under this method of segregation of fixed and variable elements is made by first taking the average of two selected groups and then applying the range method or equation method, as the case may be.

Variable overhead per unit= Change in amount/ Change in output

The result obtained under this method may not be accurate.

5.GRAPHICAL METHOD: Under this method, the portion of variable and fixed overheads are ascertained by plotting the amounts of semi-variable or semi-fixed overheads incurred at various level of activity on graph paper and drawing the ‘line of best fit’.

Under the graphical method, volume of output is drawn on horizontal axis and semi-variable expenses on vertical-axis. Expenses corresponding to each volume are plotted on the graph paper and a straight line, ‘the line of best fit’ is drawn through the points plotted. This straight line represents the ‘total cost line.’ The point where the straight line intersects the vertical-axis is taken to be the amount of fixed expenses.

6.LEAST SQUARE METHOD: Under this method, segregation of fixed and variable elements of semi-variable overhead is made by finding out a ‘line of best fit’ for a number of observations with the help of statistical methods:

x= Output or number of units.

Taking the figures of July and August

Putting the value of ‘m’ in equation (i)

NECESSITY FOR CLASSIFICATION OF OVERHEAD INTO FIXED AND VARIABLE OVERHEADS

The following are the reasons of necessity for classification of overhead into fixed and variable overheads:

HELPFUL IN DECISION MAKING: The classification of fixed or variable overheads helps in taking the following decisions by management:

FIXATION OF SELLING PRICE: The classification of overheads into fixed or variable is very helpful in determining the selling price of the products or services. Sometimes, a manufacturer charges different prices for the same articles in different markets to meet varying degrees of competition.

However, the lowest selling price of any product should at least cover prime cost plus variable overhead. This classification also helps in determining the price during trade depression or in a special market.

MARGINAL COSTING AND COST-VOLUME ANALYSIS: The classification of fixed or variable overhead elements is very essential for the technique of marginal costing and break-even analysis. It helps in ascertaining the marginal cost i.e. the total variable cost attributable to one unit of output.

Further, it assists in determining the break-even point i.e. the volume of output where there is no profit and no loss.

ABSORPTION OF OVERHEAD: This classification helps in the proper absorption of the different items of overhead. This method to be adopted for determining the absorption rates depends on the nature of overhead.