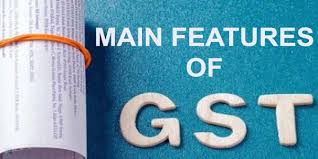 In this article you will study about the Features of GST. Make good notes of it.

GST is a tax on goods and services under which every person is liable to pay tax on his output and is entitled to get input tax credit (ITC) on the tax paid on its inputs(therefore a tax on value addition only) and ultimately the final consumer shall bear the tax.

In simple words, Goods and Service Tax (GST) is an indirect tax levied on the supply of goods and services. This law has replaced many indirect tax laws that previously existed in India.

GST is one indirect tax for the entire country.

“GST is a comprehensive, multi-stage, destination-based tax that is levied on every value addition.”

There are around 160 countries in the world that have GST in place. GST is a destination based taxed where the tax is collected by the State where goods are consumed. India is going to implement the GST from July 1, 2017 and it has adopted the Dual GST model in which both States and Central levies tax on Goods or Services or both.

GST belongs to the VAT family as tax revenues are collected on the basis of value added. Unlike in the case of a pure commodity based VAT system, GST includes services tax also. Similarly, input credit is given while calculating the tax burden. Following are the main features of GST as per the final agreement.

Most of the important indirect taxes of the centre and states are integrated under the GST. The most important tax of the central government (in terms of tax revenue collection) -the Central Value Added Tax (or Union Excise Duty), Additional Customs Duty (CVD), Special Additional Duty of Customs (SAD), Central Sales Tax (levied by the Centre and collected by the States, the fastest growing tax revenue of the centre – Service Tax, the most important tax revenue of the states – the state VAT (Sales tax) are now merged into a single tax under the Goods and Service Tax.

States have two important indirect taxes – sales tax and state excise duties. Of these two, only the sales tax is merged with the GST.

Along with these four big taxes of the centre and states, several other low revenue incurring taxes are also brought under the GST.

A. The following taxes levied and collected by the Centre are merged with the GST:

B. State taxes that are subsumed under the GST are:

The GST integrates Goods and Service Taxes into one unified tax regime. Previously, the goods and services were imposed and administered differently.

The GST proposes a four-tier rate structure. The tax slabs are fixed at 5%, 12%, 18% and 28% besides the 0% tax on essentials. Gold is taxed at 3%. The centre has strictly demanded and got an additional cess on demerit luxury goods that comes under the high 28% tax. Essential commodities like food items are exempted from taxes under GST. Other consumer goods which are common items will be taxed at 5%.4. The new GST seems to have two standard rates – 12% and 18%. GST rate structure for the goods and services are fixed by considering different factors including luxury/necessity nature.

Under the GST, there is a differential tax structure. A low tax rate of 5% is imposed on essential services. Common services are charged at 12% and some commercial services at 18%. A tax rate of 28% on luxury services is also made. Several services like education provided by an educational institution, Post Offices, RBI etc. are exempted from service taxation. The standard GST rate on services seems to be 18%. Services are taxed at a common rate of 15% previously.

Under GST and tax right over low turnover entities: GST is applied when turnover of the business exceeds Rs 20lakhs per year (Limit is Rs 10lakhs for the North-Eastern States). Traders who would like to get input tax credit should make a voluntary registration even if their sales are below Rs 20 lakh per year. Traders supplying goods to other states have to register under GST, even if their sales are less than Rs 20 lakh. There is a composition scheme for selected group of tax payers whose turnover is up to Rs 75 lakhs a year.

TAX REVENUE APPROPRIATION BETWEEN THE CENTRE AND STATES

When the centre and states are merging their prominent indirect taxes under GST, both should get their own share in the GST. For this, the GST Council has adopted a dual GST with two components – the Central GST (CGST) and the State GST (SGST).

Objective of this division is sharing the revenue from the unified GST between the centre and states.

The IGST comes to play when the commodity is produced in one state and is traded to another state (interstate trade). In this case, the share of SGST should go to the consuming state (as the GST is a destination based tax). As a consumption based tax i.e the tax SGST share should be received by the state in which the goods or service are consumed and not by the state in which such goods are manufactured.

The composition levy is an alternative method of levy of tax designed for small taxpayers with turnover is up to Rs. 75 lakhs. The scheme can be availed by manufacturers and restaurants. Other service providers can’t opt for the scheme. It enables taxpayers to make payments at a flat rate under GST, without input credits. An alternate upper limit of Rs. 50 lakhs is applicable in a few states – Assam, Arunachal Pradesh, Manipur, Meghalaya, Mizoram, Nagaland, Tripura, Sikkim and Himachal Pradesh.

The objective of the optional Composition Scheme is to bring simplicity and to reduce the compliance cost for the small taxpayers. Eligible persons opting to pay tax under this scheme can pay tax at a prescribed percentage of the turnover every quarter, instead of paying tax at normal rate. The GST rate under the composition scheme is 1% for manufacturer, 2.5% for restaurant sector and 0.5% for other suppliers of turnover. There will not be any input tax credit under the scheme. Instead of filing 3-4 returns monthly, taxpayers registered under this scheme will be required to file returns once every quarter.

RIGHT TO TAX ON TERRITORIAL WATERS

Right to impose tax on economic activities that are done on territorial waters: Here, the both centre and states have decided that states can impose and collect tax on those falls within 12 nautical miles.

Under GST though it is applicable all India level, State wise registration is compulsory. Every registered person would be assigned separate State wise GSTIN. Suppose company A has a unit in Bengaluru and another unit in Chennai and both are operating separately, then company A is required to obtain GST registration for Karnataka as well as for Tamil Nadu. In GST law, there is also an option of taking separate GST registration within the same state for different business verticals.

NO SURCHARGE WOULD BE LEVIED ON GST

Under GST, exports would not be subjected to tax. Exporter has two options to claim the refund of taxes paid on goods or services procured for export. He can execute a bond or letter of undertaking and make exports without payment of GST. A separate application to be made for refund of taxes paid on procurements. Otherwise, exporter can pay GST on export value though not liable by utilising the input tax credit available on the inputs. GST amount paid can be claimed as refund.

PAYMENT OF TAXES UNDER GST

The taxes shall be paid either through making payment through an account called ‘Electronic cash ledger’ where the taxpayer would first deposit the cash and later make payment of the taxes Or he can pay through ‘Electronic credit ledger’ where he shall make payment by utilization of input tax credit eligible on goods or services procured.

Importer of goods would be required to pay IGST along with basic customs duty. The IGST amount paid would be eligible for input tax credit.

GST council is the joint forum of Centre and States consisting of finance ministers as its members. It would make necessary recommendations regarding procedures, tax rates, exemptions, threshold limits, etc. GST Council till date has made many recommendations in the GST regarding rates, rules, etc. The administration of GST would be the responsibility of the GST Council.