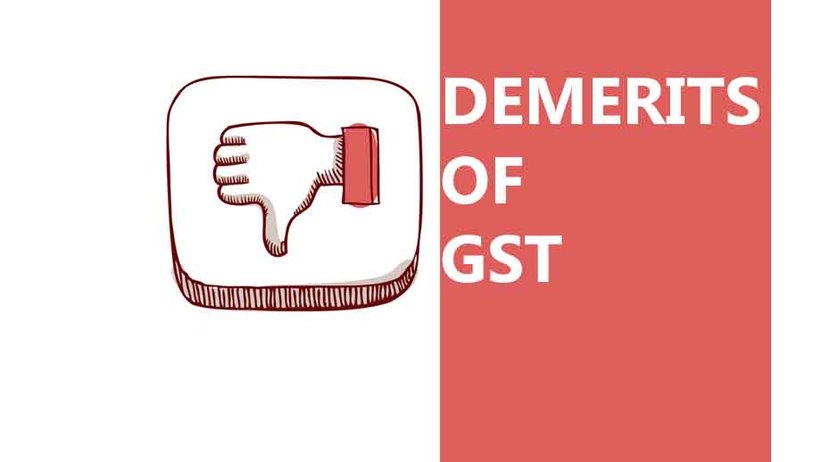 There are various benefits of GST in India. However, a tax reform of such magnitude comes with its teething problems. The following are the disadvantages of GST :

Since GST is an IT-driven law, it cannot be sure whether all the states in India are currently equipped with infrastructure and workforce availability to embrace this law. Only a few states have implemented this E- Governance model. Even today some states use the manual VAT returns system.

Earlier the small and medium enterprises had to pay excise duty only on a turnover that exceeded Rs. 1.5 crore every financial year. However, under the GST administration, businesses whose turnover exceeds Rs 40 lacs are liable to pay GST.

The GST administration states that companies are required to register in all the states they operate in. This increases the burden on the business for excessive paperwork and compliance.

Petrol and petroleum products have not been included in the scope of GST until now. States levy their taxes on this sector. Tax credit for inputs will not be available to these industries or those related industries.

There is inadequate training that is provided to the Government officers for practical usage and implementation of such systems since the GST administration heavily banks on information technology.

The overall process of ensuring GST compliance and tax filing has led to an increase in the implementation cost for the businesses. This cost refers to the expenditure or investment in resources like computers, accounting (GST), software or training initiatives for GST experts. Moreover, the overall cost of doing business mounted in the initial few months of GST implementation.

GST has transformed the way in which taxes are paid. Moreover, to achieve compliances, businesses are required to depend on services by professional GST consultants. This has led to an additional cost for smaller businesses for hiring GST consultants leading to operational costs.

Implementation of GST has led to shortage of available funds. Traders have been facing issues in claiming tax refunds or transitional refund owing to complicated procedures.

ADVERSE IMPACT ON SOME INDUSTRIES

Some tax experts believe the GST system could have negative effects as certain products have become costlier. For instance, GST would add up to as much as 8 percent to the cost of new homes and minimise the demand by about 12 percent. Similarly, the tax levied on some retail products at present is only four percent tax. However with GST, garments and clothes are likely to get expensive.

Similarly, service sector like banks also feel the pinch. The banking industry is instrumental in the process of export of services or goods. Before the GST regime, a service tax @ 14% was levied on the banking transactions. However after the GST implementation, the rate has increased to 18%, thereby increasing the transaction costs, especially in those imports or exports with huge transactions.

GST in India was a sweeping reform and benefits of GST and has changed the way businesses are conducted. Businesses are being included in the formal economy through GST implementation. GST and its benefits have provided long term returns for the Indian economy on a large scale which have been welcomed as a new change by all the stakeholders.