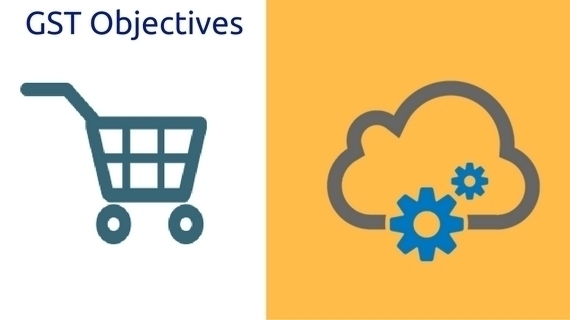 Goods and Service Tax (GST) is a comprehensive tax levy on manufacture, sale and consumption of goods and service at a national level under which no distinction is made between goods and services for levying of tax. It will mostly substitute all indirect taxes levied on goods and services by the Central and State governments in India. The objectives of GST are as follows:

TO ELIMINATE THE CASCADING EFFECT OF INDIRECT TAXES ON SINGLE TRANSACTION

Barring few indirect taxes, all the major indirect taxes levied by central and state governments have been subsumed into GST. Thus, the taxpayer and supplier need not bother about paying multiple indirect taxes under different laws.

TO REDUCE THE TAX EVASION AND CORRUPTION

GST would help in curbing of tax evasion and reduce corruption in tax department. In the system of GST, there would be less chance to claim false input tax credit as it requires matching of invoices between recipient and the suppliers. Input tax credit can be claimed only if the tax has been deposited by the registered supplier to the Government. Each invoice wise matching and verification would be made to ensure that taxes are properly paid to the government.

TO INCREASE THE PRODUCTIVITY

GST would help in increasing the enterprise productivity and efficiency. Under the previous tax regime, there were many constraints relating to logistics and impractical procedures regarding claim of input tax credit. There was also levy of entry tax in few States on entry of goods into states. In GST regime, entry tax has been subsumed. Number of checks on State borders would also reduce due to removal of check posts. These factors would help in increase of productivity.

Tax compliance under GST is expected to be more compared to the previous tax regime. As the number of tax laws have been subsumed, the tax payer would have to comply mainly with GST law with returns and registration needed. There is no need to file different returns and obtain different registration for compliance.

TO INCREASE THE TAX TO GDP RATIO AND THE REVENUE SURPLUS

GST would increase the tax to GDP ratio and it is expected to be about 11.9% by 2019-20. The more tax to GDP ratio, the more would be the tax collections and it indicates the status of better economic system of the country. More tax compliances and wider tax base would result in higher tax revenue to the government and the objective of GST is to have a revenue surplus to the government.

TO BRING MORE PEOPLE UNDER THE TAX NET

GST helps in widening of the tax base and bring large number of people into tax net. In earlier regime, there were many exemptions and rules for registration for different types of taxes. Now there is a single limit for turnover below which registration would not be required. More tax payers would be covered under the tax net which ultimately could result in increasing the tax base and tax revenue for the government.

TO ACHIEVE THE POLICY OF ONE NATION ONE TAX

GST replaces multiple indirect taxes which were existing in the previous regime. There is a single and neutral tax in most cases so there would not be any differences in the tax rates between one state to another state. In this way, GST law has achieved the policy of one nation one tax.

TO PROVIDE A SEAMLESS CREDIT OF INPUT TAXES

Cross-sectional credit of input was not allowed earlier. Also, there were many restrictions and conditions in previous tax regime. In GST, much simpler rules have been laid to utilize the cross-sectional credit of input taxes. For example, a trader who was earlier not allowed to take credit of service tax paid on services is allowed to take credit on goods as well as services. The seamless system of credit would ensure that the taxes on supplies are paid to the extent of value additions and net liability and double taxations are avoided.