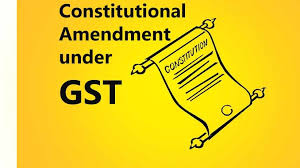 The constitutional aspects of GST is as follows:

The introduction of the GST regime made amendments to the Constitution so that the Centre and states are empowered at the same time to levy and collect GST. This concurrent jurisdiction of the states and Centre also requires an institutional mechanism that ensures joint decisions are taken about the structure and operation of GST.

The Union Government in third week of December, 2014 (19 December, 2014) introduced Constitution (122nd Amendment) Bill, 2014 in Parliament which when passed shall pave the way for introduction of proposed Goods and Service Tax (GST) in India. This is an improvised version of lapsed 115th Amendment Bill of 2011.

Contrary to the general perception amongst many quarters that this Bill itself is a GST Bill, let it be very clearly understood that this is not a GST Bill. In fact, GST Bill is not in sight at all at this point in time. What has been introduced is only the Constitutional Amendment Bill enabling or empowering the union Government to levy a tax to be called GST which it cannot levy under the present Constitution. The Bill on passage would enable the Central Government and the State Governments to levy GST. This tax (GST) shall be levied concurrently by various states as well as Union Government. Once this is passed by two-third majority in the Parliament, atleast 50 per cent of the states will have to pass it. Once this amendment is through, the road will be clear for GST Bill (and then Act), given the political will. Eventually, we will then have the following taxes –

SALIENT FEATURES OF CONSTITUTION (ONE HUNDRED AND TWENTY-SECOND AMENDMENT) BILL, 2014

The Constitution (One Hundred and Twenty-Second Amendment) Bill, 2014 was introduced in the Lok Sabha on December 19, 2014. The following is the gist of amendments proposed by this Bill:

A Goods and Services Tax Council (GSTC) was created by the union finance minister, revenue minister, and ministers of state to take decisions on GST rates, thresholds, taxes to be subsumed, exemptions, and other features of the taxation system. The state finance ministers mentioned that the EC would be a platform for states where there would be discussions of their regional issues. The GST Council is a separate entity that would oversee the implementation of the GST system.

Some of the major decisions taken by the GSTC so far are: