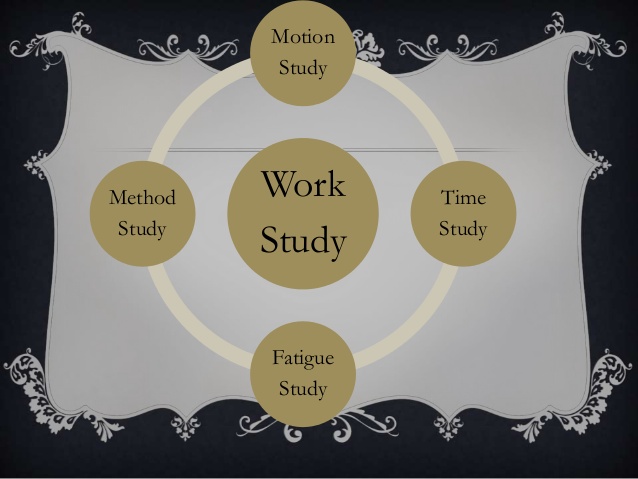 WHAT IS WORK STUDY

Under Scientific management, the management is responsible for determining the task for every employee which he performed in standardized working conditions. The standard work may be determined through proper investigation and taking into account average worker abilities.

Under this study the best method of doing the job is to found out that will incur minimum cost and gives maximum benefit. There is detailed study of whole process of production to make improvements in material handling, transportation, inspection, storage etc. The objective of this study is to minimize the cost of production and maximize the quality and customer satisfaction.

Example: For production of shoes, there can be labor intensive method and machine intensive method. To find out which is best, management must evaluate the cost of production with both the methods and compare both the methods with the available resources of the company. The method which involves minimum cost and exploits maximum resources must be selected as the best method of production.

The technique of time study involves determination of:

This scientific technique is conducted with the objectives of:

Motion study is conducted before the time study. Both studies help in determining the best method of doing a job and standard time allowed for it.

Example: While observing an average worker, if it is observed that worker has to bend frequently to pick up the tools from the tool box placed under his table, then a stool can be placed near his seat to keep the tool box over it so that worker does not waste his energy in bending again and again. Same energy he can use for improving his production capacity or efficiency level.

Fatigue means tiredness. The fatigue study is conducted with the aim to determine:

A person is bound to get tired when he is performing the job for a longer period of time. There is always a need for rest interval. Taylor suggested that an average worker should be observed frequently. His efficiency levels when starts declining should be noted and on this basis rest intervals should be decided upon.