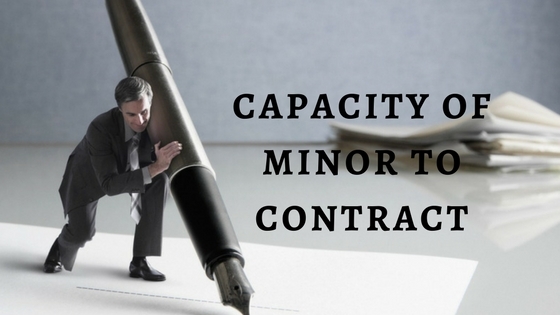 QUESTION: Who is competent to enter into a contract? Discuss the position of minor in this regard?

According to Section 10 of the Indian Contract Act 1872, an agreement becomes contract if it is entered into between the parties who are competent to the contract.

So the persons such as:

are incompetent to enter into the contract.

All the contracts entered into by the incompetent persons are void.

Minor is defined under Section 3of the Indian Majority Act 1875 as every person domiciled in India shall be deemed to have attained the age of majority when he has completed the age of 18 years or before.

In the following two cases, person attain the age of majority on the completion of 21 years:

The position of minor in context of contractual capacity is regarded as to be protected as according to law, a minor is not mentally mature to safeguard his interest and he is not in position to judge what is good or bad for him.

The following are the rules regarding the contract with the Minor:

1. A CONTRACT WITH MINOR IS VOID-AB-INITIO:

According to the provisions of Section 11, the minor is incompetent to make a contract. But Contract Act is silent on the point whether the contract by a minor is void or voidable. In this there is a decisive case which is as follows:

A landmark case held in the year 1903 in which the court held that a minor’s agreement is void-ab-initio that means any agreement with a minor is void from the very beginning itself.

Facts of the case– Dharmodas Ghosh being a minor mortgaged his immovable property to a money lender Brahmo Dutt and secured a loan of Rs.20,000 at 12% interest rate per year. Later on, the plaintiff only paid Rs.8000 and refused to pay the rest of the amount. His mother(legal guardian) took the defence that his son being a minor was not liable for his actions and not bound to pay the sum.

Judgment – The Privy Council held that a minor is incompetent to contract (section 10) and an agreement with such a person cannot be enforced. Thus, Brahmo Dutt’s appeal was dismissed as there was no contract between the parties.

It has also been later added that if the guardian has entered into a contract for the benefit of the minor, then it is enforceable.

Ratification means the subsequent adoption and acceptance of an act of agreement. Since a minor’s agreement being a nullity and void ab-initio has no existence in the eyes of law. So it cannot be ratified by the minor on attaining the age of majority. The reason behind this is that ratification relates back to the date of making an agreement.

The Principle of Estoppel means a person is estopped (precluded) from denying the truth of the statement or representation he has made,

There is no such estoppel against the minor. In other words, when a minor fraudulently enters into a contract, representing that he is a major, but in reality he is not, then later on he can plead his minority as a defence and cannot be estopped from doing so.

Example: A, a minor purchased the goods worth 1000 on credit from B, by fraudulently representing himself to be major. Later on A refused to make payment. B sued A for recovery of amount. Now A can plead his minority as a defense and he cannot be estopped.

But if the minor is still in possession of any property which he has obtained by representing himself as a major, the court may direct him to restore that property to the other party on the basis of equity, as minors have no privilege to cheat others.

There can be no specific performance of the agreements entered into by minor as they are void-ab-initio. However, a contract entered into on his behalf by his parents/guardian or the manager of his estate can be specifically enforced by or against the minor provided the contract is

5. MINOR MAY ACT AS AN AGENT

A minor may be appointed as an agent. In all transactions of work through an agent, the principal is the party to the contract. The agent is not a party to contract, therefore, an agent is not necessary to be competent to contract. So, all the transactions made by a minor as an agent are valid. But when a minor is appointed as an agent, his principal cannot hold him liable for his acts done against the instructions.

Example: P, a principal, gives A, a minor, a ring of gold worth 3,000 and asks him not to sell it for less than its value, but A sells the ring for 2000 only. The transaction of the sale of the ring is valid between P and the buyer and P has no right to claim damages from A for this negligence.

6. MINOR AS A PARTNER

A minor cannot become a partner in a firm. Also, a new partnership cannot be formed with a minor as a partner. But Section 30 of Indian Partnership Act, 1932 provides that minor can be admitted into a partnership for the benefits of the partnership with the consent of all the other partners. However, his personal property will not be liable for the losses of the firm.

A minor is not liable under any contract. Even for the supply of necessaries, he is not liable personally. Therefore, a minor cannot be adjudged insolvent.

9. MINOR’S PARENTS ARE NOT LIABLE

In all contracts with a minor, his parents are not liable whether the contract is for necessaries or not. This rule is based on the principle that the moral obligation of the parents to provide for their child does not impose on them any liability to pay the debts incurred by the child. The parents are liable only when the child makes a contract as an agent on behalf of his parents.

Where a minor and an adult jointly enter into an agreement with another person, the minor has no liability but the contract as a whole can be enforced against the adult.

A tort is civil wrong. A minor is liable for his torts unless the tort is reality a breach of contract. In other words, the liability for torts arises because of negligence but not due to contractual relationship. So, a minor cannot be held responsible for the tort arising out of breach of contract but he can be held responsible for ‘tort’ in ordinary way.

A, a minor hired a mare from B for the purpose of riding. He was given strict instruction not to jump or larke with the mare.’ A lent the mare to his friend C, who killed the mare by making it to jump. B brought an action against A for damages in torts. A was held liable to pay the damages. Here A’s wrongful act of lending the mare to a friend, is independent of the contract.

13. MINOR CAN BE PROMISEE OR BENEFICIARY

Under section 68 of the Indian Contract Act 1872, a tradesman who supplies the necessaries to the minor can recover the amount. However minor cannot be held personally liable for this rather his property is liable.

Necessaries includes the articles which are reasonable necessary to the minor having regard to his status in life such as a watch or a bicycle and includes the services such as education and medical advice etc.

Thus the contract with the minor is void-ab-initio mainly and enforceable only in case it is for the benefit of the minor. However, minor would never be personally liable for necessaries supplied to him and only his property is liable.