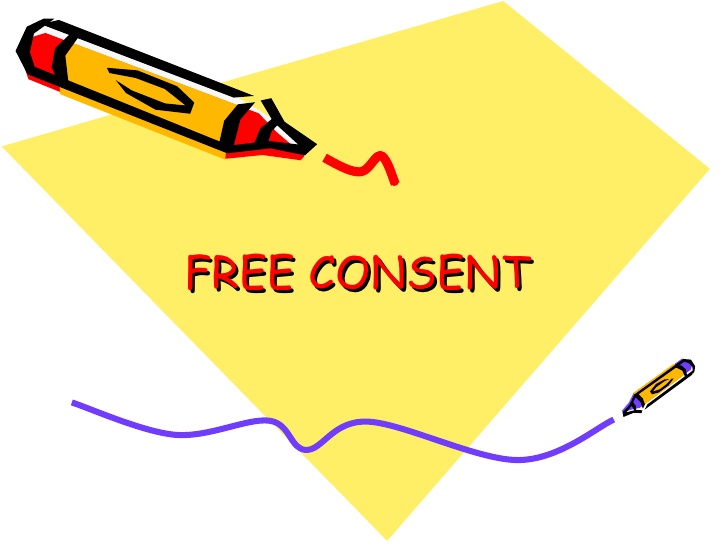 For a contract to be valid, it is necessary that the parties provide free consent to be terms. If the contract were not with free consent, the contract would be voidable by the other party whose consent was not taken or was not free. Consent is said to be free only when it is not entered by means of:

ACCORDING TO SECTION 13 OF INDIAN CONTRACT ACT 1872

“Free Consent is when two or more persons agree upon the same thing and in the same sense”.

So the two people must agree to something in the same sense as well.

EXAMPLE: A agrees to sell his car to B. A owns three cars and wants to sell the Maruti. B thinks he is buying his Honda. Here A and B have not agreed upon the same thing in the same sense. Hence there is no consent and subsequently no contract.

Coercion means using force to compel a person to enter into a contract. So force or threats are used to obtain the consent of the party under coercion, i.e it is not free consent.

ACCORDING TO SECTION 15 OF INDIAN CONTRACT ACT, 1872

EXAMPLE: A threatens to hurt B if he does not sell his house to A for 5 lakh rupees. Here even if B sells the house to A, it will not be a valid contract since B’s consent was obtained by coercion.

Coercion makes the contract voidable. This means the contract is voidable at the option of the party whose consent was not free. So the aggravated party will decide whether to perform the contract or to void the contract.

The section also further describes how the person can abuse his authority in the following two ways,

If consent is not free due to undue influence, the contract becomes voidable at the option of the aggravated party. And the burden of proof will be on the dominant party to prove the absence of influence.

Fraud means deceit by one of the parties, i.e. when one of the parties deliberately makes false statements. So the misrepresentation is done with full knowledge that it is not true, or recklessly without checking for the trueness, this is said to be fraudulent. It absolutely impairs free consent.

ACCORDING TO SECTION 17 OF INDIAN CONTRACT ACT, 1872

EXAMPLE: A bought a horse from B. B claims the horse can be used on the farm. A turn out the horse is lame and A cannot use him on his farm. Here B knowingly deceived A and this will amount to fraud.

One factor to consider is that the aggravated party should suffer from some actual loss due to the fraud.

Consent cannot be free when an agreement is entered into under a mistake by either of the parties. When both the parties are under a genuine mistake, the particular contract is considered void and can, therefore, be avoided.

On the other hand, if any mistake of fact is made by either of the parties and not by both, the defaulting party is prohibited from denying the formation of an agreement on the grounds that he/she was mistaken with respect to the subject matter.

Free Consent is absolutely essential to make an agreement a valid contract. Consent of the parties to the contract must be free and voluntarily. Consent to the contract has to be given without any kind of pressure or delusions. It is important that the consent given by the parties is free as this can affect the validity of the contract. If the consent to the agreement was obtained or induced by coercion, undue influence, fraud, misrepresentation or mistake, then it has the potential to make the agreement void.