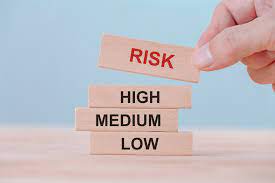 In simple words risk is danger, peril, hazard, chance of loss, amount covered by insurance, person or object insured. The risk is an event or happening which is not planned but eventually happens with financial consequences resulting in loss. There is saying higher the risk more the profit.

The degree of risk refers to the likelihood of occurrence of an event. It is a measure of accuracy with which the outcome of a chance event can be predicted. In most of the risky situations, two elements are commonly found:

1. The outcome is uncertain i.e. there is a possibility that one or other(s) may occur. Therefore, logically, there are at least two possible outcomes for a given situation.

2. Out of the possible outcomes, one is unfavourable or not liked by that individual or the analyst.

ACCORDING TO EMMETT J. VAUGHAN

“Risk is a condition in which there is possibility of an adverse deviation from a desired outcome that is expected or hoped so far.”

“At its most general level, risk is used to describe and situations where there is uncertainty about what outcome will occur.”

ACCORDING TO IRVING FISHER

“Risk may be defined as combination of hazards measured by probability.”

“Risk is the possibility of loss of something of value.”

“Risk is the catastrophe in its latent form.”

“Risk is the probability of an event combined with the magnitude of the losses and gains that it will entail.”

“Risk allows for a number of possible outcomes not all of which are bad.”

“Risk is defined by most of those who seek to measure it as a product of the probability and utility of some future event.”

ACCORDING TO BECK AND BERNSTEIN

“The perception of risk from chance of loss into opportunity for gain.”

Uncertainty can be perceived as opposite of certainty where you are assuring of outcome or what will happen. Accordingly, some weights or probabilities can be assigned into risky situations but uncertainty, the psychological reaction to the absence of knowledge lacks this privilege. Decision under uncertain situations is very difficult for the decision-maker. It all depends upon the skill, judgement and, of course luck. Uncertainty being a perceptual phenomenon implies different degrees to different person.

Assume a situation where an individual has to appear for the first in the newly introduced insurance examination.

(a) an ,individual student undergone training in insurance.

(b) an individual with training or experience in insurance.

A’s perception towards uncertainty (of performance in examination) is different from that of B. Nonetheless, in both situations, the outcome that is the questions which will be asked in the examination are different.

(a) Aleatory uncertainty – uncertainty arising from a situation of pure chance, which is known.

(b) Epistemic uncertainty – uncertainty arising from a problem situation where the resolution will depend upon the exercise of judgment.

LOSS AND CHANCE OF LOSS

A risk refers to a situation where there is the possibility of a loss.

Loss has been defined in many ways. Loss in accounting sense means that portion of the expired cost for which no compensating value has been received.

Loss refers to the Act or instance of losing the detriment or a disadvantage resulting from losing.

Loss means being without something previously possessed.

The chance of loss refers to a fraction or the relative frequency of loss.

The chance of loss in insurance sense is the probability of loss.

For example, assume there are 10,000 factories in the insurance pool, which may be affected due to earthquake, and on the basis of past experience, 5 have been affected, then the probability of loss is 0.0005. The whole game of insurance business is based on the probability of loss. If the insurer estimates correctly, he wins else loses or is forced to close the business.

A peril refers to the cause of loss or the contingency that may cause a loss. In literary sense, it means the serious and immediate danger. Perils refer to the immediate causes of loss. Perils maybe general or specific e.g. fire may affect assets like building, automobile, machinery, equipment and also, humans. Collusion may cause damage to the automobile resulting in a financial loss.

Hazards can be classified as follows:

(1) Physical Hazards-Property Conditions-consists of those physical properties that increase the chance of loss from the various perils. E.g. stocking crackers in a packed commercial complex increases the peril of fire.

(2) Intangible Hazards-Attitudes and Culture-Intangible hazards are more or less psychological in nature. These can be further classified as follows:

(a) Moral Hazard-Fraud-These refer to the increase in the possibility or severity of loss emanating from the intention to deceive or cheat. For example-putting fire to a factory running in losses. With an intention to make benefit out of exaggerated claims, deliberately indulging into automobile collusion or damaging it or tendency on part of the doctor to go for unnecessary checks when they are not required, since the insurance company will reimburse the loss.

(b) Morale Hazard-Indifference-It is the attitude of indifference to take care of the property on the premise that the loss will be indemnified by the insurance company. So, it is the carelessness or indifference to a loss because of the existence of insurance contract. For example: smoking in an oil refinery, careless driving etc.

(c) Societal Hazards-Legal and Cultural-these refer to the increase in the frequency and severity of loss arising from legal doctrine or societal customs and structure. For example, the construction or the possibility of demolition of buildings in unauthorised colonies.