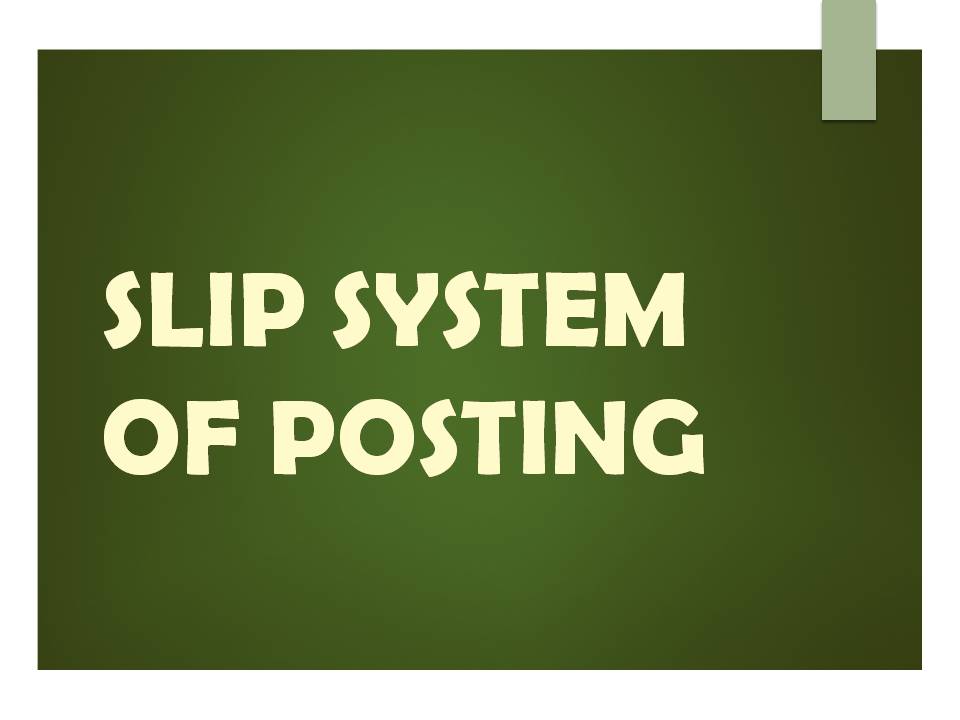 Slip System of Posting refers to the method in which the transaction is entered into the books of accounts on the debit or credit side as per the nature of the transaction. It is adopted by the banking companies to keep a record of the deposits made and withdrawals made by the customers out of their account.

Slips are the loose leaves of the paper which is used to perform a transaction with the banks. Each bank has its own name on the slips and format of the slip may vary from the bank to bank.

There are usually three kinds of slips:

Withdrawal Slip is the slip used for drawing the amount from the bank account. It is a document of bank on which a person writes the date, account number and amount of money to withdraw from the bank. These slips contains the following particulars to be filled:

Cheque is a negotiable instrument which can be transferred by mere hand deleivery. It is a document issued by an individual to his or her bank, directing them to pay the person whose name is mentioned in the document the sum specified in it for such a document to be valid, it is important that the person issuing it has an account in the said bank. An issuer of the cheque is called Drawer, and the one to whom it is issued is the Drawee. Cheque is used to make safe and convenient payment. It is less risky and danger of loss is minimized.

FEATURES OF SLIP SYSTEM OF POSTING

REASONS FOR ADOPTION OF SLIP SYSTEM

ADVANTAGES OF SLIP SYSTEM OF POSTING

The advantages of slip system of posting are as follows:

DIVISION OF LABOUR: In this system of posting, the customer himself fills up the slips for the transactions. It reduces the burden of the clerks and thus promote the efficiency.

EASY METHOD AND SCIENTIFIC: The slip system of posting is very easy method. As there are loose slips which are to be filled, so this is a scientific method. Each slip has a particular kind of function performed by it.

EVIDENCE IN THE COURT: Under slip system of posting the slips are prepared. These are kept as record for the future. In case of any dispute, these slips can be used as an evidence in the court of the law.

HELPS IN KEEPING THE ACCOUNTS UP TO DATE: From the slips filled in by the customers, the amount of transactions are posted on the debit side and credit side of the account of the customer which keeps the account updated.

NO NEED TO PREPARE SUBSIDIARY BOOKS: In this system of posting, the transactions are posted to the ledger accounts directly from the slips. So there is no need arises to prepare the subsidiary books.

DISADVANTAGES OF SLIP SYSTEM OF POSTING

CHANCES OF LOSS OF SLIPS: Slips are just like the loose leaves of the paper. It may be lost, distorted or misappropriated very easily. Thus it is unjustified to maintain the records in form of the slips.

NO VERIFICATION: As the posting is done directly to the ledger accounts and no entry is made in the subsidiary books. So verification of accounts is not possible.