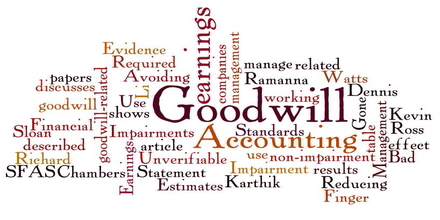 Goodwill means the ‘Good-Name’ or the reputation of the firm. The management and employees earn this by their hard work and honesty. It is like a magnet that attracts the customers towards the business. It helps in earning higher profits in comparison to the normal profits earned by the other firms in the same line of business.

ACCORDING TO ERIC L KOHLER

It is the present value of expected future income in excess of a normal return on the investment in the tangible assets.

ACCORDING TO JO MAGEE

The capacity of a business to earn profits in future is basically what is meant by the term goodwill.

Goodwill is a thing very easy to describe, but very difficult to define. It is the benefit and advantage of name, reputation and connections of a business. and the one thing which distinguishes an old established business from new business as it first starts, is composed of variety of elements. It differs in its composition in different trades and in different businesses in the same trade.

ACCORDING TO LORD LINDLEY

The term goodwill is generally used to denote the benefit arising from connection and reputation.

ACCORDING TO LORD ELDON

It is nothing more than the probability that the old customers will resort to the old place.

ACCORDING TO SPICER AND PEGLER

It may be said to be that element arising from the reputation, connections or other advantages possessed by a business which enables it to earn greater profits than the return normally to be expected on the capital represented by the net tangible assets employed in the business.

When a man pays for goodwill, he pays for something which places him in the position of being able to earn more than he would be able to do by his own unaided efforts.

It is an intangible asset because it has no physical existence and it cannot be seen or touched. But it is not a fictitious asset. It is so because fictitious assets do not have a value whereas goodwill has a value in case of profit making business organisations. It can be sold by selling the entire business.

It is the one which is acquired by making a payment. For example, when a business is purchased, the excess of purchase consideration over its net assets is referred to as purchased goodwill.

This goodwill is generated internally and arises from a number of characteristics or attributes which an on-going business possesses.

Goodwill is an attractive force which brings in customers. In White Man Smith Motor Company V Chaplin, the variety of customers were classified zoologically i.e. cats, dogs, rats and rabbits.

The faithful dog attaches to the person rather than to the place. It will follow the outgoing owner, if he does not go too far. It is sort of personal goodwill and is generally found in professions.

The rat has no attachment either with the owner of the house or with the place. Rat is interested only in filling its stomach no matter from where things come. So certain type of customers which are neither attached to any owner of the business nor to any shop. Such type of goodwill has small value or no value.

Rabbit has the habit of living close and is afraid of going too far. There are customers who neither attract value to the owner nor shop but to the nearness of the shop. Such type of goodwill has a low market value.