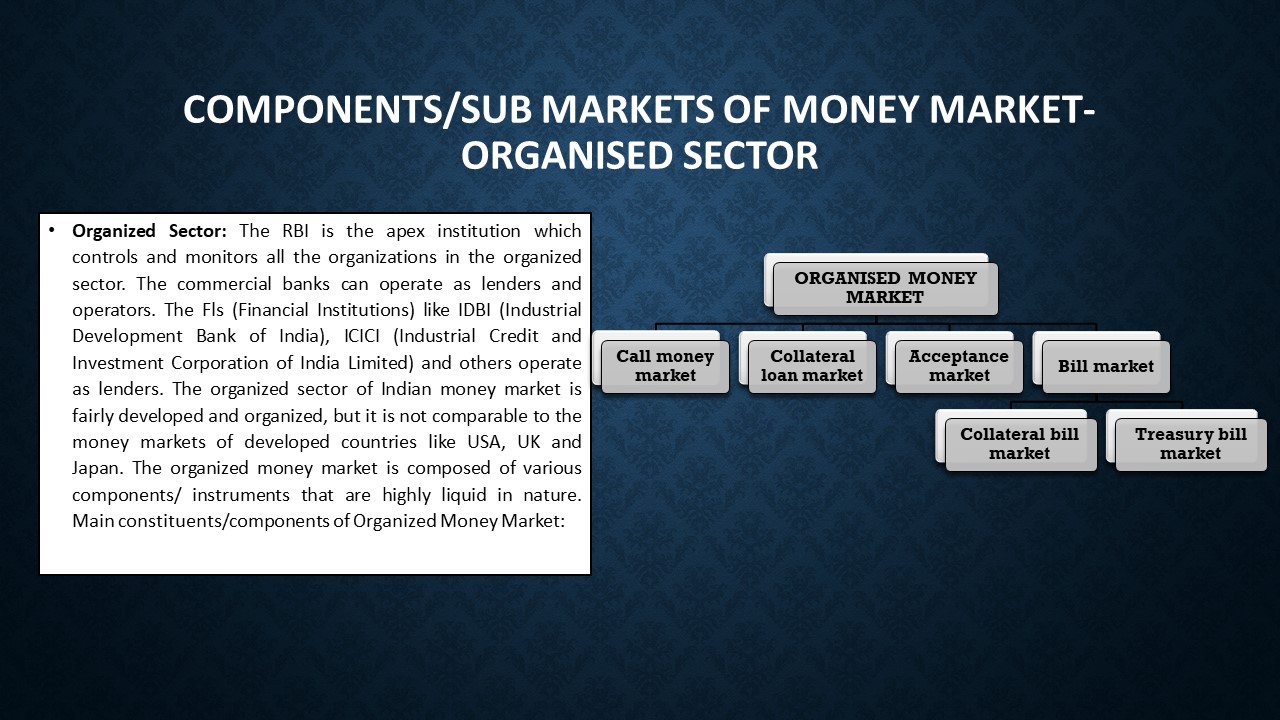 In view of the rapid changes on account of financial deregulation and global financial markets integration, central banks in several countries have striven to develop and deepen the money markets by enlarging the scope of instruments and participants so as to improve the transmission channels of monetary policy. The entire money market in India can be divided into two parts.

The RBI is the apex institution which controls and monitors all the organizations in the organized sector. The commercial banks can operate as lenders and operators. The Fls (Financial Institutions) like IDBI (Industrial Development Bank of India), ICICI (Industrial Credit and Investment Corporation of India Limited) and others operate as lenders.

Call money market refers to the market for very short period. Bill brokers and dealers in stock exchange usually borrow money at call from the commercial banks. These loans are given for a very short period not exceeding seven days under any circumstances, but more often from day-to-day or for overnight only i.e. 24 hours. There is no demand of collateral securities against call money.

They possess high liquidity, the borrowers are required to pay the loan as and when asked for, i.e. at a very short notice. It is on account of this reason that these loans are called ‘call money’ or call loans. Thus, call money market is an important component of the money market.

The investment of funds in the call market meets the need of liquidity but not that of profitability because the rate of interest on call loans is very low and changes several times during the courses of the day.

It is basically located in the industrial and commercial locations such as Mumbai, Delhi, Calcutta, etc.

These transactions help stock brokers and dealers to fulfill their financial requirements. The rate at which money is made available is called as a call rate and it is highly volatile. Thus rate is fixed by the market forces such as the demand for and supply of money. Commercial banks, co- operative banks, Discount and Finance House of India Ltd. (DFHI), Securities trading corporation of India (STCI) participate as both lenders and borrowers and Life Insurance Corporation of India (LIC), Unit Trust of India (UTI), National Bank for Agriculture and Rural Development (NABARD) can participate only as lenders. Under call money market, funds are transacted on an over-night.

It is an important sector of money market. The loans are generally advanced by the commercial banks to various private parties in the market. These collateral loans are backed by the securities, stocks and bonds. Securities are returned to the borrower when loan is repaid. Once the borrower is unable to repay the loan, the collateral becomes the property of the lender. These loans are given for few months. The borrowers are generally the dealers in stocks and shares. But even smaller commercial banks can borrow collateral loans from bigger banks. Collateral loan market includes the following:

I. Market for Financial Guarantees

Another important and specialized segment of money market is acceptance market. Acceptance Market is basically an Investment market that is based on instant credit tools. An acceptance is best described as the time draft or the exchange of hill that is credited as the compensation for certain goods.

It is a short-term debt instrument issued by a firm that is guaranteed by a commercial bank. Banker’s acceptances are issued by firms as part of a commercial transaction. These instruments are similar to T-Bills and are frequently used in money market funds.

It is a market in which short term papers or bills are bought and sold. The important types of bill market are:

This is a market for sale and purchase of short term government securities. These securities are called as Treasury Bills which are promissory notes or financial bills issued by the RBI on behalf of the Government of India. Treasury bills are instrument of short-term borrowing by the Government of India, issued as promissory notes under discount. The interest received on them is the discount which is the difference between the price at which they are issued and their redemption value.

The unorganized money market mostly finances short term financial needs of farmers and small businessmen. The unorganized Indian money market mainly comprises of indigenous bankers, money lenders and unregulated non-banking financial intermediaries. Though they may exist in urban centers, their activities are mainly concentrated in rural areas. In fact, 36% of rural households depend on these for their financial requirement. The main constituents of unorganized Money market are:

Indigenous Bankers (IBs): The IBs are individuals or private firms who receive deposits and give loans and thereby they operate as banks. Unlike moneylenders who only lend money, IBs accept deposits as well as lend money. They operate mostly in urban areas, especially in western and southern regions of the country. Over the years, IBs faced stiff competition from cooperative banks and commercial banks. Borrowers are small manufacturers and traders, who may not be able to obtain funds from the organized banking sector, may be due to lack of security or some other reason.

The rate of interest varies from market to market / bank to bank. However they do not solely depend on deposits, they may use their own funds. The main advantages of indigenous bankers are simple and flexible operations, informal approach, personal contact, quick services and availability of timely funds. However, they have their drawbacks like a very high rate of interest (18% to 36%), combining banking with trade, interest in non-banking activities like general merchants, brokers, etc.

Money lenders (MLS): MLs are important participants in unorganized money markets in India. There are professional as well as non professional MLS. They lend money in rural areas as well as urban areas. They normally charge an invariably high rate of interest ranging between 15% p.a. to 50% p.a. and even more. The borrowers are mostly poor farmers, artisans, petty traders, manual workers and others who require short term funds and do not get the same from organized sector for unproductive purposes. Their services are prompt, informal and flexible.

Chit funds: They are saving institutions wherein members make regular contribution to the fund. They collect funds from the members for the purpose of lending to members (who are in need of funds) for personal or other purposes. The chit funds lend money to its members by draw of chits or lots. Chit funds are famous in Kerala and Tamil Nadu.

Nidhis: They are mutual benefit funds as loans are given to members (from the Deposits made by members themselves) at a reasonable rate of interest. The loans are generally given for purposes like house construction/repairs. Nidhis are prevalent in South India.